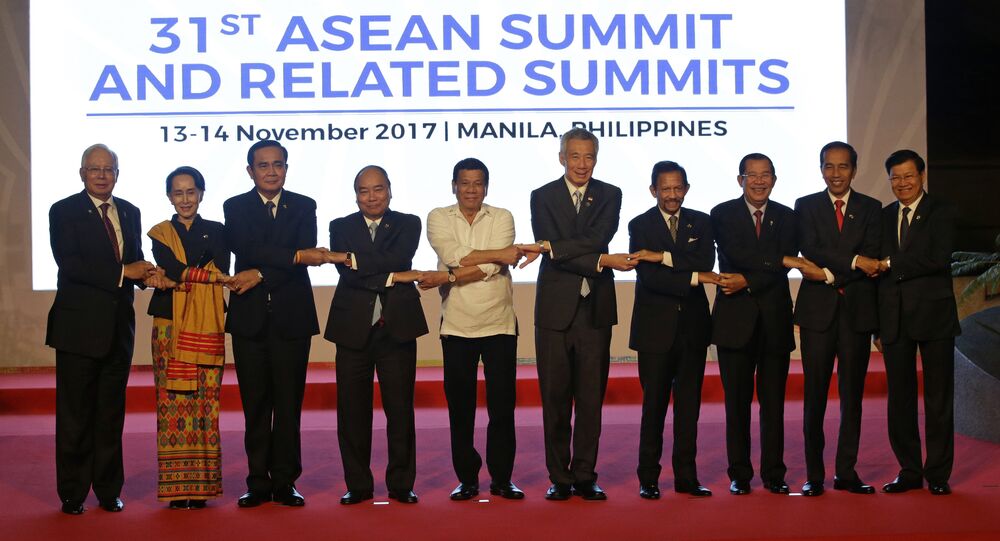 MOSCOW (Sputnik) - The Association of Southeast Asian Nations (ASEAN) and the group's leading trade partner China have a joint target of reaching $1 trillion in trade by 2020, Singaporean Foreign Minister Vivian Balakrishnan said on Thursday during the ASEAN-China ministerial meeting in Singapore.

"China has been ASEAN’s top trading partner for the past eight consecutive years. We upgraded the China-ASEAN Free Trade Agreement in 2015 and we’re working to fully implement this upgrade protocol. We are also striving toward a joint target of $1 trillion in trade and $150 billion in investment by 2020," Balakrishnan said.

The minister went on saying that against the backdrop of growing protectionism the group should speed up the negotiations for the Regional Comprehensive Economic Partnership (RCEP), which aims to enhance trade and investment activities in the region, as well as to eliminate economic development gaps among the parties.

© Sputnik / Ramil Sitdikov
Russian Foreign Minister Speaks at ASEAN Meeting in Singapore
According to the 2017 ASEAN Economic Community Chartbook, the group's trade with China amounted to $368 billion in 2016, showing an increase of 2.9 percent year-on-year.

The statement was made amid trade tensions between Beijing and Washington, which have been mounting since US President Donald Trump announced steep tariffs on steel and aluminum imports in March, triggering a wave of disputes with a number of key trade partners. China and the US have since been exchanging threats to impose further bilateral import duties.

The ministerial meetings of ASEAN countries and dialogue partners kicked off in Singapore earlier on Thursday. The event will last through Saturday.

China Appeals to US' Common Sense in Trade Dispute, Warns Against Blackmailing