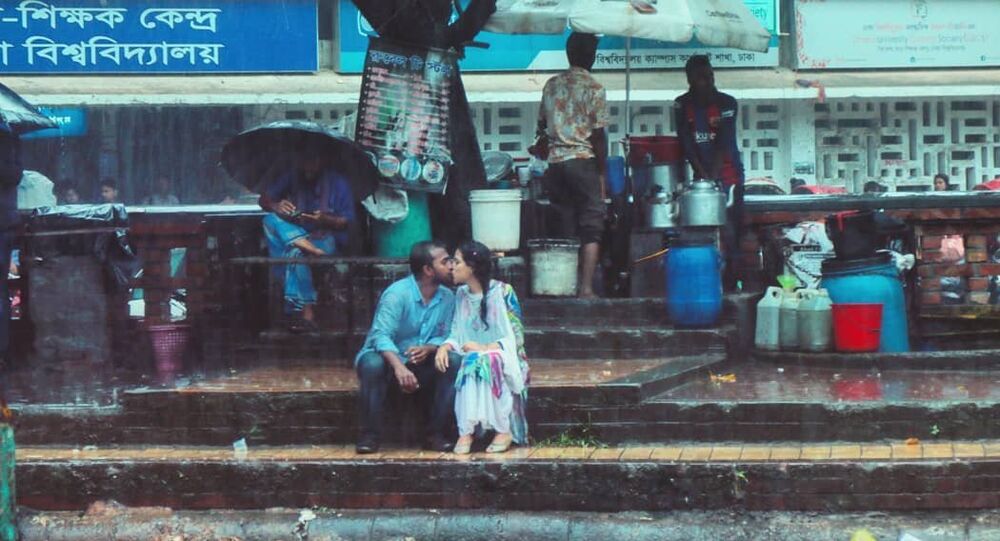 A photo of a young couple kissing under a monsoon rain at Dhaka University went viral in Bangladesh and abroad, but triggered a storm of Islamic rage in one of the world's most populous Muslim-majority countries; authorities insisted that it was indecent and encouraged harassment.

30-year-old photojournalist Jibon Ahmed from Bangladesh, who works for the local news website Purbapashchim, was reportedly attacked by his fellow journalists and photographers after he posted a photo of a kissing couple on his social media accounts.

As a local outlet news18.com stated, the snap also cost the photographer his job. His editor asked the journalist to turn in his ID without any explanation, the Washington Post reports.

The news outlet's boss, when contacted by the US newspaper, said that the fellow journalists’ attack on Ahmed was due to personal issues. He also stated that the man hadn’t appeared in the office since July 24th. According to the editor, employers supported the journalist and promised to take legal action in the wake of the assault.

However, Ahmed told the local media that he hadn’t taken any legal steps as these people were his colleagues, whom he will have to work with. According to him, they hadn’t given any reason for aggression either.

Ahmed took the photo of discord near Teachers and Students' Centre of Dhaka University, which has witnessed protests and assaults over the last month, including an alleged attack on two students for holding hands. According to the journalist, he saw a young couple kissing under the rain and photographed the romantic image. The couple is said to have been aware that they were being photographed, and they didn’t object.

The journalist said, as quoted by the WP, that before posting the picture on his social media page, he sent it to the editors, but they decided not to publish it, fearing “a negative response.” The photographer then posted the snap on Facebook and Instagram, prompting an active response.

While some admired the shot and shared the picture, others condemned it as inappropriate.

News18.com has quoted a micro-blogger, who posted “Lovers are getting more audacious by the day. Earlier these things were done in secret. Now they are doing it in broad daylight. The day is not far when they will be making love in public."

There were those, who claimed that such images encouraged harassment and rape culture, according to the media.  Some lambasted the photo for inspiring women to “unnaturally explore their sexuality.”