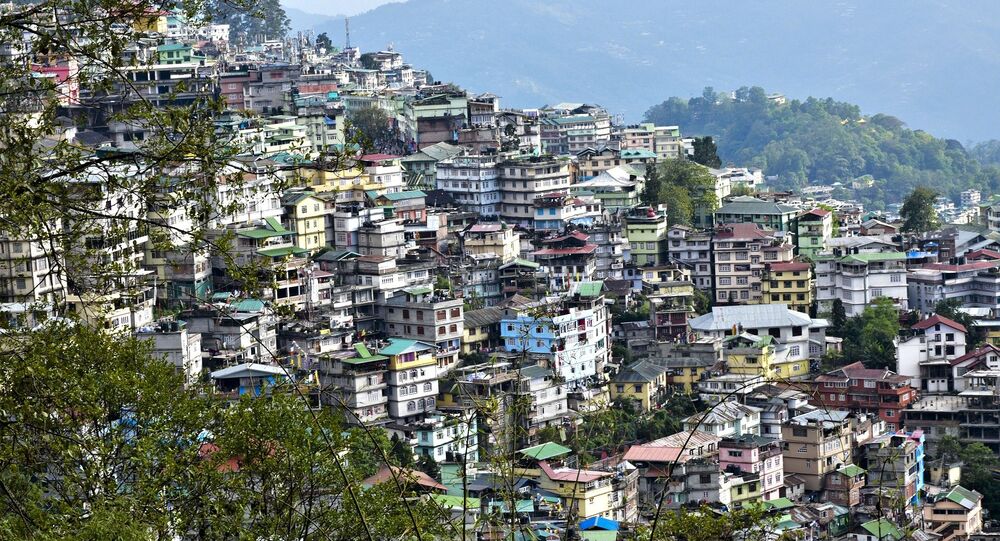 The Sikkim sector of the Indo-China border, which lies in India’s northeast, is considered "settled" according to the 1890 border agreement that defined the boundary between Sikkim and Tibet.

A group of Chinese soldiers went two kilometers into Indian territory in the Sikkim sector of the border and Indian soldiers formed a human chain to stop the transgression, according to a source in the Indian government.

"Around 50 PLA troops had transgressed into the Indian territory and stayed there for hours at the site. When repeated requests failed, nearly 100 Indian soldiers formed a human chain to block the movement of the Chinese troops," the source told Sputnik.

© AFP 2020 / DIPTENDU DUTTA
China, Bhutan Resume Border Talks a Year After Doklam Spat Involving India
This was the first standoff between Indian and Chinese troops in the Sikkim sector after last year's 73-day impasse that was triggered by an attempt by Indian soldiers to stop a Chinese construction team from building a road in the Doklam plateau — a disputed territory involving India, China and Bhutan.

Local media reports suggest that at least 28 transgressions were reported in the last three months in various sectors of the Line of Actual Control (LAC) — a loosely demarcated border between India and China. These transgressions were all reported after the historic Wuhan informal summit between Indian Prime Minister Narendra Modi and China's President Xi Jinping in April this year.

Meanwhile, a top commander of the Indian Army has downplayed these incidents.

"On a large number of occasions, there were reports that the PLA of China has carried out transgressions in various areas along the LAC. But such transgressions have always taken place in areas where we have a differing perception of the LAC. We do not have a delineated LAC. Similarly, when we speak to Chinese authorities, they also refer to us having transgressed into their territory on several occasions," Lt General Ranbir Singh, the northern army commander, told reporters in Kashmir after paying tributes to the 1999 Kargil conflict heroes on Thursday.

© REUTERS / Adnan Abidi/File Photo
High Level Chinese Military Delegation in India to Implement Wuhan Promise
Earlier on Thursday, India's Ministry of External Affairs (MEA) denied media reports about purported remarks made by a US official on the situation in Doklam.

"The press reports attributing remarks on Doklam to a US official is incorrect. … I would reiterate that since the disengagement of Indian and Chinese border personnel in the Doklam area on 28 August 2017, there have been no new developments at the face-off site and its vicinity. The status quo prevails in this area," the Ministry of External Affairs said.

A top US official, while comparing Chinese actions in the Himalayan region with its maneuvers in the disputed South China Sea said that China has quietly resumed its activities in the Doklam area and neither Bhutan nor India has sought to dissuade it.

India's MEA again repeats the unfortunate line: "no new developments at the face-off site and its vicinity" in Doklam. While technically correct, the line obscures China's effective capture of much of the rest of Doklam. China's expanding military footprint there can't be hidden. pic.twitter.com/WvvJvUeLws

According to the media reports, Congresswoman Ann Wagner, during a congressional hearing, asked, "Although both countries back down, China has quietly resumed its activities in Doklam and neither Bhutan nor India has sought to dissuade it. China's activities in the Himalayas remind me of its South China Sea policies. How should our failure to respond to the militarization of the South China Sea inform the international response to these Himalayan border disputes?"

"China has quietly resumed its activities in Doklam and neither Bhutan nor India has sought to dissuade it. China's activities in the Himalayas remind me of its south China Sea policies," Congresswoman Ann Wagner said.#Doklam pic.twitter.com/COWrtRtOvB