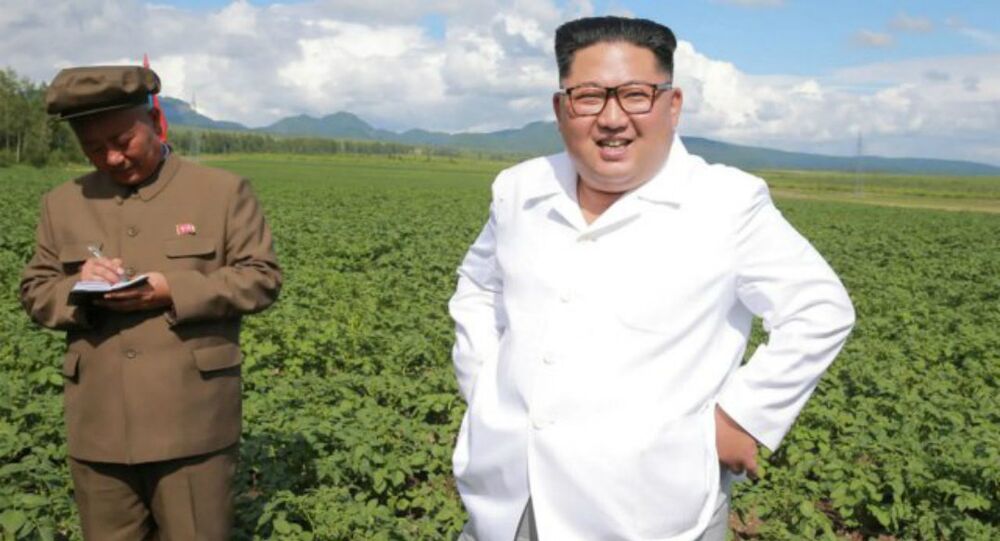 North Korean state media has renewed warnings to the population that belt-tightening might be in the near future, fanning fears that denuclearization talks with the US, stalled since mid-June, might never actually lead to the repeal of economic sanctions against the East Asian country.

The official newspaper of the Korean Workers Party, Rodong Sinmun, wrote recently that a new "arduous march" may be in store for the Korean people, but pledged government determination to soldier through the tribulations, Yonhap News Agency reported July 23.

"Even if [we] have to travel a long distance through snowstorms with our belts tightened, we will go straight to the people's road which was proved as immortal in the process of the 70-years-long struggle and to the road of socialism," the paper wrote.

The relaxation of economic sanctions preventing much key resource trade with the Democratic People's Republic of Korea was a major point of negotiation between North Korean leader Kim Jong Un and US President Donald Trump at their summit in Singapore June 12. The essence of the agreement they came to was that Trump would lower restrictions on exports to North Korea once Pyongyang had taken key steps to end its nuclear weapon and ballistic missile programs.

Concrete progress has not been made on any of the points agreed upon at the Singapore summit, aside from North Korea's supposed destruction of sites associated with its missile and nuke programs. An effort to bring home remains of US soldiers from the Korean War — another of the Singapore agreements — stalled when US Secretary of State Mike Pompeo failed to meet with Kim during a visit in early July. Kim instead opted to visit a potato farm near the Chinese border.

Yonhap also reported that in recent weeks, Kim has stepped up his calls for self-reliance and strongly chastised party and government officials for their handling of economic affairs while visiting industrial and agricultural sites.

Economic sanctions by the United Nations have been in place since 2006, when the DPRK tested its first nuclear weapon, and the US has attempted to orchestrate further sanctions against the country designed to strangle it economically by denying it fuel and food as well as foreign currency from exports. The US itself has refused to trade with the DPRK since 1950, when the Korean War began.

Nonetheless, CNBC reported in 2017 that 2016 had been the North Korean economy's strongest year since 1990, with a gross national product increase of 3.9 percent.

The North Korean state's governing principle for the last half-century has been self-reliance (‘Juche' in Korean). The North Korean obsession with autarky stems in large part from it having been caught in the middle of the quarrel between its two erstwhile-allies, the Soviet Union and People's Republic of China.

The three states had once formed a close relationship, with both the DPRK and the USSR coming to the aid of the Chinese communists during their civil war, which they won in 1949, and the Chinese and Soviets in turn coming to the North Koreans' aid when US and allied forces threatened to overrun the country during the Korean War.

When the rivalry between China and the USSR grew in the early 1960s, the DPRK stepped away from choosing sides, and leader Kim Il Sung began to emphasize the importance of Korean socialist construction not being dependent on another country. Through the split between China and the USSR, North Korea retained ties with both sides, especially receiving food from them, since only about one-fifth of the mountainous country is actually cultivable, according to the Food and Agriculture Organization of the United Nations.

Still, before 1976, the North had the higher GNP of the two Koreas, according to the CIA World Factbook, only losing ground due to its turn toward self-reliance and because of heavy foreign investment in the South's economy.

Despite Juche, the collapse of the Soviet Union and the turn toward a market economy by China in the 1980s and 1990s were catastrophic for all their allies, but none more so than the DPRK. North Korea was beset with disaster after disaster, gutting the government's ability to mitigate the effects of the loss of their primary benefactors.

The period from 1994 to 1998 is known in North Korean history as The Arduous March, a time when famine swept the country following unparalleled flooding and drought, with which the already-strained economy could not bear. A US Census Bureau estimate in 2011 said that out of a population of 22 million, between 500,000 to 600,000 people died of starvation between 1993 and 2000 in the DPRK, and malnutrition affected millions more.