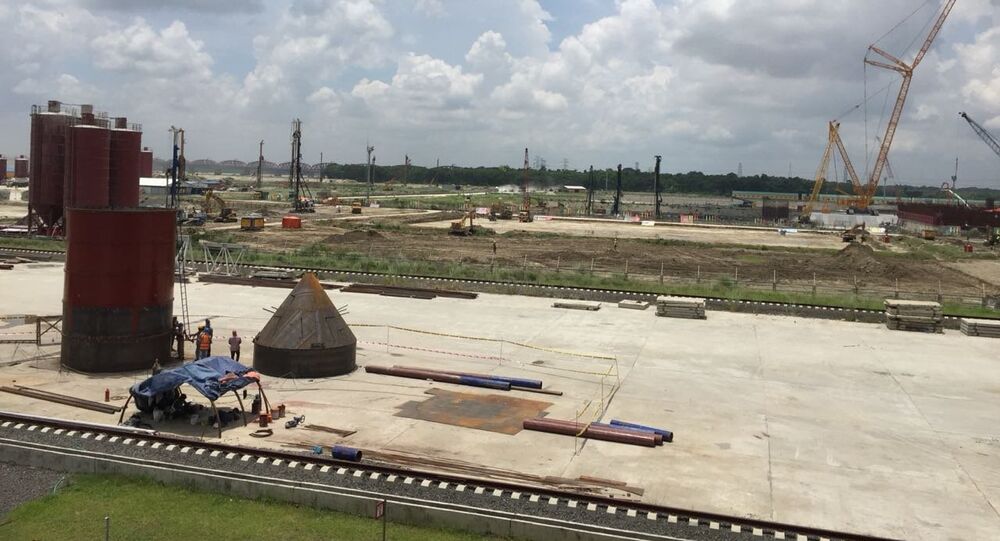 The Rooppur nuclear power plant is being made with a Russian G3+ reactor, which contains the latest safety technologies, including a radiation control system. Adequate measures are being taken to keep the people working on the project safe.

Dhaka (Sputnik): The prime minister of Bangladesh, Sheikh Hasina, has said that her country's relationship with Russia is now at its peak and that their bond is as strong as it was during the Liberation War of Bangladesh in 1971. She said this during her inaugural speech at the "first concrete" ceremony of the second unit of the Rooppur nuclear power plant (RNPP), Bangladesh's first nuclear power plant being built with Russian help.

"The Rooppur Nuclear Power Plant was a dream project of Bangabandhu [the father of the nation]. After assuming office in 2009, we again took up the project and the Russian Federation came forward to help us in its implementation. I convey my gratitude to the Russian government and its people for extending the support," Prime Minister Sheikh Hasina said.

During her speech, she also threw light on the much discussed "waste management" issue of the Rooppur power plant.

"Russia will take the responsibility for the nuclear wastage management. Nobody needs to be anxious about it," Hasina added

Bangladeshi Prime Minister Sheikh Hasina and the deputy prime minister of the Russian Federation, Yury Borisov, jointly inaugurated the construction of the power plant's second unit on Saturday afternoon at Rooppur, Pabna, 160 kilometers from Dhaka. The director of the International Atomic Energy Association, Dohee Hahn, was also present at the inaugural ceremony.

© CC BY-SA 3.0 / Rex shaheen / Rooppur Nuclear Power Plant
Russian Built Rooppur NPP is Safe Against Natural Disasters - Nuclear Experts
The successful implementation of the nuclear power plant project has triggered much enthusiasm among the common people, especially Bangladesh's business community. The capital, Dhaka, has been decorated with life-size images of Hasina and Putin, the leaders of Bangladesh and Russia, upholding the long-lasting friendship of the two countries.

"In the case of atomic energy, capital investment is very high but operational cost is very low. So, there are chances that the people of Bangladesh may get electricity in a lower price from RNPP," said Dr. Asad — Uz — Zaman, a renowned energy economist.

Zaman also noted that the project would open opportunities for improved economic relations with Russia in the coming days.

"Russia has a very strong technological backbone, especially in port development and infrastructural areas; they have earned huge expertise. I think Bangladesh can largely benefit if we can transfer these technologies from Russia," said Mir Nasir Uddin, a former president of the Federation of Bangladesh Chamber of Commerce and Industry (FBCCI).

Nasir, who is now visiting Moscow to find new business opportunities, advocated for more "people to people contact" between Bangladesh and Russia. To achieve this, he suggested that both countries should ease visa norms.

© Sputnik / Evgeny Yepanchintsev
Russia, China to Work Jointly on Global Uranium Production Markets - Rosatom
Professor A. S. M. Amanullah, a social scientist at Dhaka University was of the opinion that the RNPP would serve as a precursor to more collaboration between Russia and Bangladesh on various fields.

"Russia has developed world-class expertise in producing atomic energy. And after this RNPP, I think in the near future, Russia will come to Bangladesh with a few more megaprojects," added Amanullah.

Civilians too have expressed their excitement as they are seeing the NPP as a sustainable solution to meet the country's fast-growing electricity demand.

READ MORE: Most Powerful Nuclear Research Reactor to Be Built in Russia by 2022 – Rosatom

"It's a matter of great pride that we will have the NPP to produce electricity," said Riad Mahmud, a small grocery shop owner in Dhaka. He observed that there are not many developing countries like Bangladesh capable of producing a nuclear power plant.

Helen Ahmed, a student at Dhaka University, was of the opinion that the establishment of a nuclear power plant was necessary as the country's economy is growing very fast. "It's a historic moment for the nation. Our long-awaited NPP is under construction now."

Mohim Chowdhury, a garment factory owner in Keranigonj, Dhaka, said, "We are suffering a lot due to an inadequate supply of electricity. Sometimes, I need to pay workers even if they do not work since I cannot run the factory machines without electricity."

He is hopeful that the nuclear power plant will provide a sustainable solution to the country's fast-growing electricity demand.