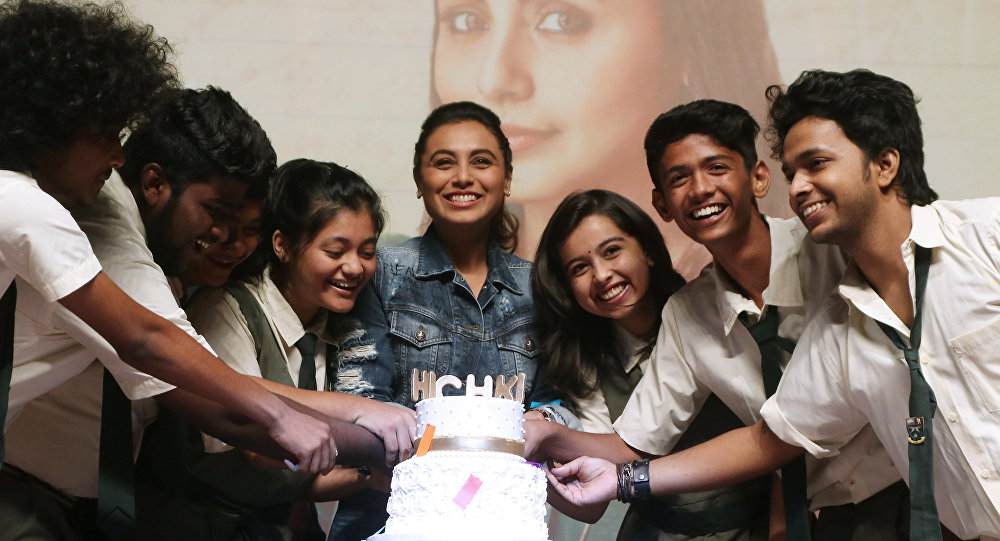 The critically acclaimed film is an adaptation of the 2008 US film "Front of the Class" whose storyline revolves around a determined teacher dealing with Tourette's syndrome. The American film was adapted from the US-based motivational speaker Brad Cohen's autobiography, "Front of the Class: How Tourette Syndrome Made Me the Teacher I Never Had."

New Delhi (Sputnik) — After an overwhelming response at the Belt and Road Film Week at Shanghai International Film Festival, the Indian film "Hichki" is set to be released in Russia this September. The film will be dubbed in Russian for the local audience.

"Hichki" is the Hindi word for hiccups.

"It's really heartening that 'Hichki' will now release in Russia. It professes the message of converting your worst obstacle into your biggest strength by embracing it and working each day to win over it. It has a beautiful message that nothing is impossible and life can be beautiful even with our inherent complications. I'm really excited to see the reaction of audiences in Russia," Siddharth P Malhotra, the director of the film, said in a statement.

© CC0
Indian Comedy Drama 'Toilet: a Love Story' Sparks Heated Discussion in China
The film's producer, Maneesh Sharma, expects a wide release in Russia, citing the universal appeal of the film. The film — whose title is translated as "Ya-prepod" in Russian — is expected to be released across 70 screens in the country.

"'Hichki' has touched the hearts of audiences across age groups, across countries. The film moved audiences at the Shanghai Film Festival where it was screened recently and we got a standing ovation there. It was an overwhelming reaction from a non-Hindi speaking market and now that the film is releasing in Russia, we expect audiences to feel the same emotions that people across the world are feeling after seeing the movie," Manish Sharma said.

Of late, the Indian film industry has been making efforts to regain its popularity among the Russian audience. During the Soviet era, Raj Kapoor was a megastar among Russians, but after the centralized purchasing system was discontinued in 1991, Indian films disappeared from Russia's movie theaters. Indian film producers are once again focused on the Russian market and are holding film festivals with the help of the Indian government. Some Indian film producers have even expressed a keen interest in filming in Russia.