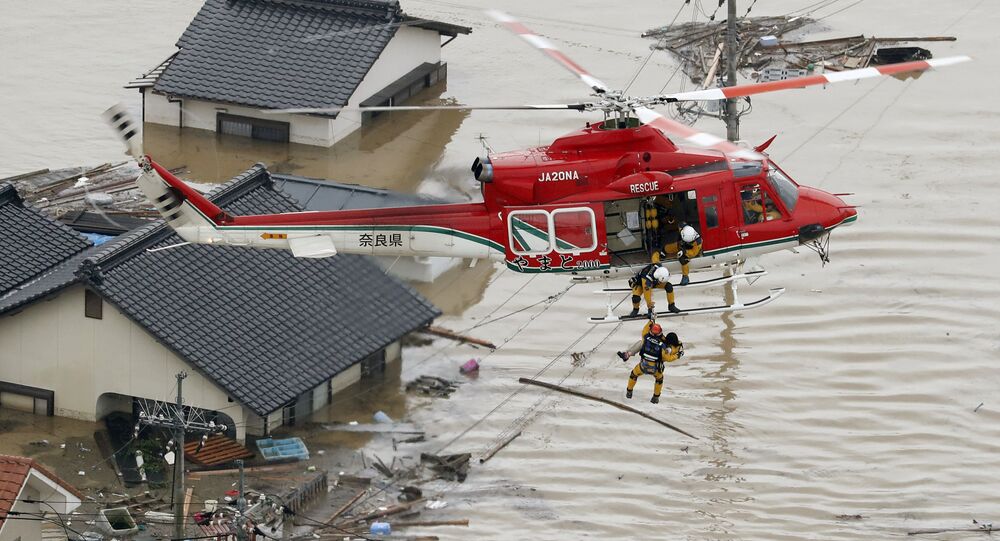 TOKYO (Sputnik) - The death toll from the flood disaster in Japan has reached 222 people, local media reported Tuesday citing the police. Earlier reports suggested that the number of the victims stood at 216 people.

Twenty people have been officially reported missing, with further 28 people mostly in the Hiroshima prefecture still unaccounted for, Chief Cabinet Secretary Yoshihide Suga was quoted as saying by NHK on Saturday.

On Sunday, Japanese Prime Minister Shinzo Abe encouraged authorities in the regions affected by the disaster to boost their efforts in coping with the aftermath of the flooding, promising to grant financial support to them.

Many of the #JapanFlood victims are elderly. Without much outside assistance, they’re having to help themselves in the massive clean-up of their ravaged community https://t.co/UgCGCnKBGA pic.twitter.com/iQ0tM7w4sM

© REUTERS / Peace Winds Japan
Riding High: Rescuers Save Horse From Roof Days After It Went Missing in Japan's Floods (PHOTOS)
The record rainfall has caused the worst flooding and landslides in decades in central and western parts of Japan, displacing 5,000 people. Some 200,000 households are without water supply. Over 60,000 firefighters, police and soldiers are assisting in relief efforts.

Thousands were evacuated from the affected areas, some 5.9 million Japanese have received instructions or recommendations on evacuation in connection with the heavy rains, with over 30,000 people staying in evacuation centers.

On Friday, the Japanese cabinet met to agree financial assistance worth roughly $350 million to 58 worst-hit areas across ten prefectures.

This is Yanohigashi, near Hiroshima. It was smashed by deadly landslides after Japan’s torrential downpours. Several people are still missing here and the damage is immense.#Japanflood pic.twitter.com/gZaGtPZ7sK

Meanwhile, an intense heat wave killed at leat 14 people over the weekend in Japan and high temperatures hampered the recovery in disaster-hit regions, Reuters reported.

The heat was reportedly most intense in land ares such as Gifu prefecture, in the town of Ibigawa it soared to 39.3 Celcius (102.7 Fahrenheit). The capital city of Tokyo recorded a high of 34 Celsius on Monday.

The JMA said that temperatures of 35 Celcius or above were recorded at 200 locations arond the country on Sunday.

Japanese meteorologists warned that the current heat wave was due to the layering of two high pressure systems over much of Japan and is expected to continue for the rest of the week, Reuters reported.

Death Toll from Japan Floods Up to 195