Incumbent Defense Minister Song Young-moon was briefed on a Defense Security Command (DSC) document disclosing such plans back in March but did not take action. After President Moon Jae-in was informed about the document by one of the opposition lawmakers, he ordered the probe, according to the Yonhap News Agency.

Those subject to the investigation are supposed to include then DSC commander Cho Hyun-chun, then-Defense Minister Han Min-koo, former chief of the presidential National Security Office Kim Kwan-jin, and the incumbent defense minister, who has already faced calls for resignation from the opposition, the media outlet reported.

READ MORE: South Korean Ex-President's Confidante May Be Sentenced to 25 Years in Jail 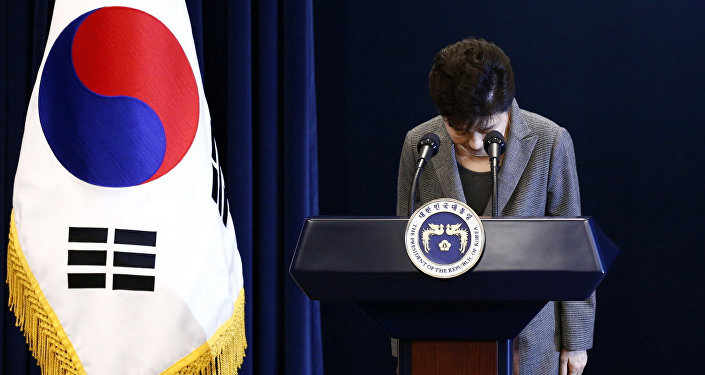 © REUTERS / Jeon Heon-Kyun/Pool
Two Ex-Chiefs of S Korean Intelligence Arrested Over Illegal Money Transfers
A large-scale political scandal broke out in October 2016 when Park was accused of having allowed her longtime friend and close associate Choi Soon-sil to get involved in state affairs. She was also suspected of being complicit in Choi’s extortion of $54.9 million from big conglomerates, including Samsung, in exchange for business favors.

The ex-president is also said to have conspired with her friend to force more than 50 companies to donate $72.4 million to two charity funds controlled by Choi.

The scandal led to Park’s impeachment in December 2016 that was confirmed by the country's Constitutional Court on March 10, 2017. Twenty days later, on March 30, 2017, she was arrested.

In April 2018, the Seoul Central District Court sentenced Park to 24 years in prison.