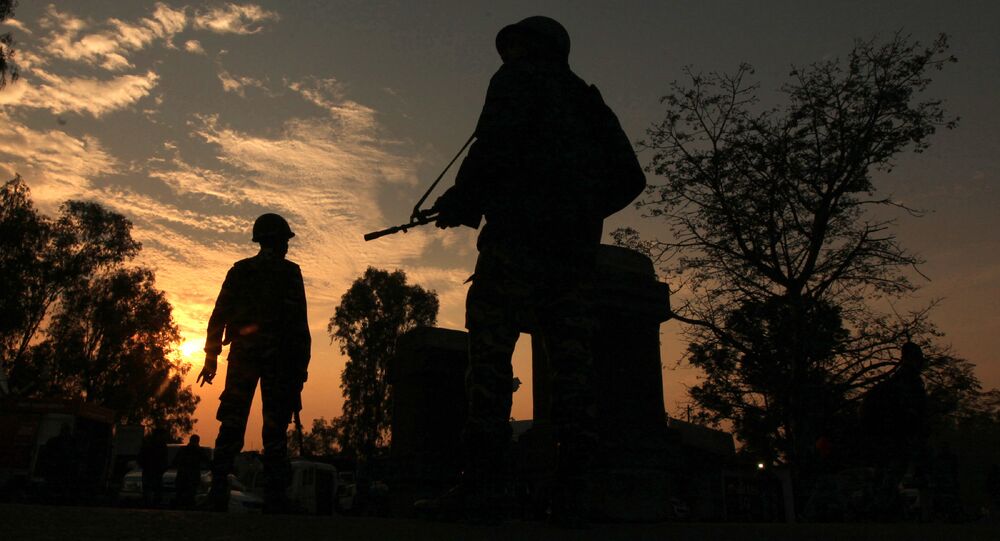 India and Pakistan will participate in a counter-terrorist military exercise in Russia next month – their first military collaboration since the two countries gained independence. Nonetheless, soldiers from both countries have worked together in third countries for over 60 years in peacekeeping operations under the United Nations.

New Delhi (Sputnik) — India has selected 200 troops, mainly of the 5 Rajput Regiment of the Indian Army and airmen of the Indian Air Force, to take part in a military exercise to be held under the umbrella of the Shanghai Cooperation Organisation (SCO) next month in Russia. This is the first time India will conduct military training alongside Pakistan.

The exercise named "Peace Mission 2018" will take place from August 22-29 at Chelyabinsk in west-central Russia wherein around 3,000 troops from India, Pakistan, Russia, China, Kyrgyzstan, Uzbekistan, Tajikistan, and Kazakhstan will take part in the exercise.

© AP Photo / Anjum Naveed)
Cooperation at SCO Can Streamline India-Pakistan Peace Efforts - Analyst
With over 70 percent of India's military assets being of Russian origin, the Indian Army and the Indian Air Force will not be sending any of their military assets, as the soldiers will use Russian equipment.

"The Indian contingent will be lead by a Brigadier-rank officer and is expected to fly out in an IL-76 with their weapons. Tanks and other heavy equipment will be provided by the Russian armed forces to be used by the Indian troops from our mechanized units," a source told Sputnik.

This is the first time Indian and Pakistani troops will be participating in the multilateral exercise, which is held once every two years. India and Pakistan became SCO members on June 9, 2017.

Meanwhile, India and China have held a military exercise called "Hand-in-Hand" the last few years. This year, the two armies are likely to resume their bilateral military exercise in September after the cancellation of last year's drill following a border standoff in Doklam.