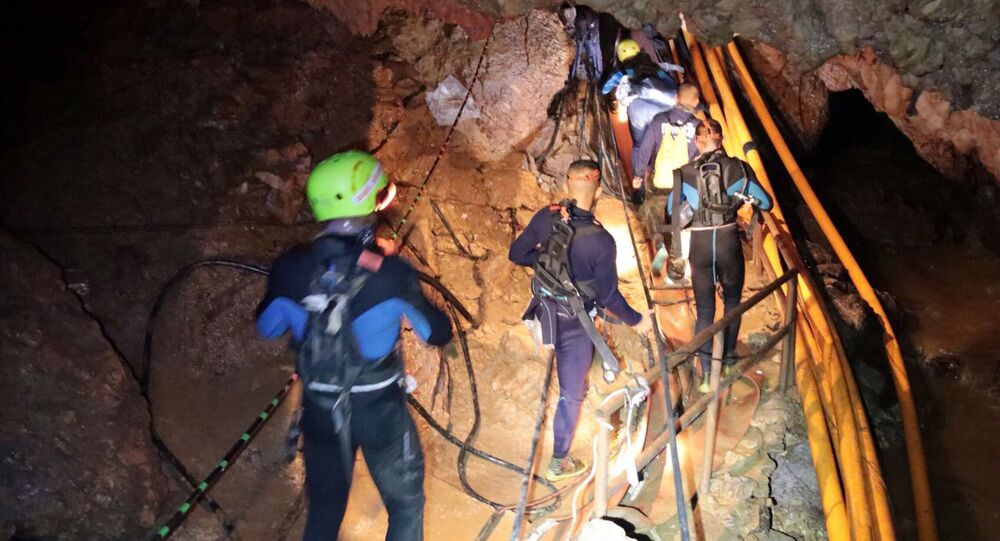 The founder of Tesla and Space X has delivered the rescue device he promised to develop with his companies, and entered the flooded cave system where a local teenage football team has been trapped for more than two weeks. Meanwhile, the rescue mission has entered its third stage; five await rescuers.

US tech tycoon Elon Musk has shared a series of posts on social media from the cave system in northern Thailand where teenagers from the local team Wild Boar and their coach await rescue. The entrepreneur brought a kid-size capsule that his company developed for the rescue operation, named after the unfortunate squad.

Just returned from Cave 3. Mini-sub is ready if needed. It is made of rocket parts & named Wild Boar after kids’ soccer team. Leaving here in case it may be useful in the future. Thailand is so beautiful. pic.twitter.com/EHNh8ydaTT

​Musk also entered the cave himself, and posted a video of his journey on Instagram.

Just got back from Cave 3

The US-based South African billionaire earlier offered his help to the rescuers, revealing on July 6that engineers from SpaceX and The Boring Company were heading to Thailand to assist the rescue operation. To get the kids out of the cave, his team has devised Primary Path, “a tiny, kid-size submarine using the liquid oxygen transfer tube of a Falcon rocket as a hull" which was light enough to be carried by 2 divers and small enough to get through narrow gaps. The pod was tested on July 8 in a pool at a Los Angeles schools. The entrepreneur, who posted a video of the tests on Twitter, pointed out that the device was small enough to get through the tight passages of the cave labyrinth, which narrows to 70 centimeter, according to the reports.

​Although he later claimed that he would leave the rescue submarine in Thailand in case it was needed in the future, he stated this capsule “could also work as an escape pod in space” after some modifications.

The operation to rescue the schoolboys and their coach has entered the third stage, according to the Thai rescue mission chief. They are hoping to bring out the five remaining people from the flood trap "at the same time."

On June 23, heavy rain prevented 12 members of a local football team and their coach from leaving the Tham Luang cave just hours after they entered the cave system. After a ten day search, they all were found alive, and on July 10, the operation to get them out of the cave began. Four teenagers were rescued that day, and four more were rescued a day later.