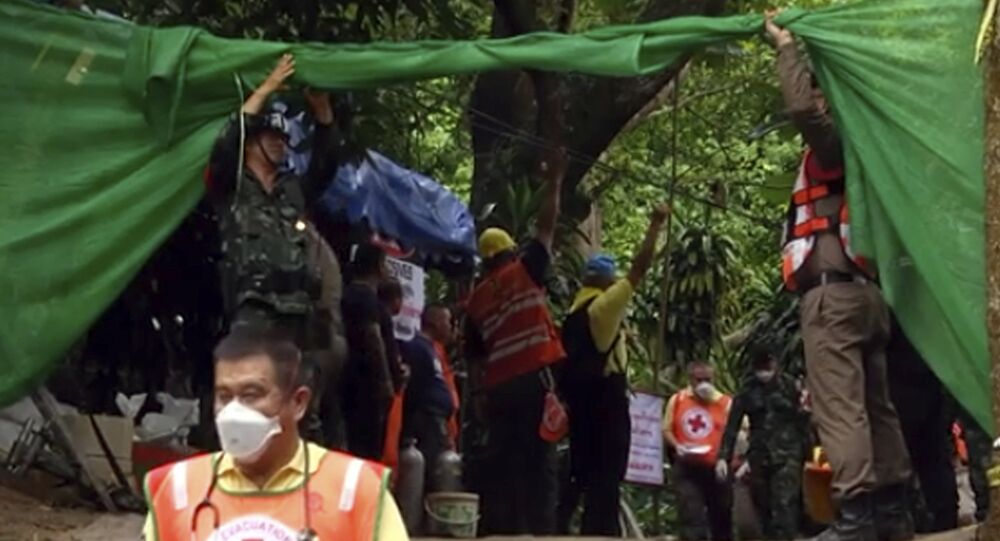 Thai rescue mission chief said that the operation to rescue school boys and their coach from a flooded cave system in the north of the country had entered the third stage.

The rescuers are hoping to bring out the five remaining people trapped inside the cave system "at the same time," according to the head of the rescue team.

© AFP 2020 / LILLIAN SUWANRUMPHA
WATCH At Least 4 Boys Have Exited Thai Cave, Rescue Medical Team Says
On June 23, heavy rain prevented 12 members of a local football team and their coach to leave the Tham Luang cave just hours after they entered the complex of caves. The search lasted for ten days after which they all were found alive. Early on Sunday, the head of the rescue team announced the start of an operation to get the teenagers and their coach out of the cave.

The children were taken out in light-diving gear and for one-fifth of the journey they swam under the water accompanied by experienced divers.

Four teenagers were rescued on Sunday. The rescue operation was then suspended and later resumed in the morning. Another four people from the youth soccer team "Wild Boar" were rescued on Monday.

Some 90 divers, 50 foreign and 40 Thai, were involved in the operation to rescue the boys from the cave, the head of the rescue operation said earlier.