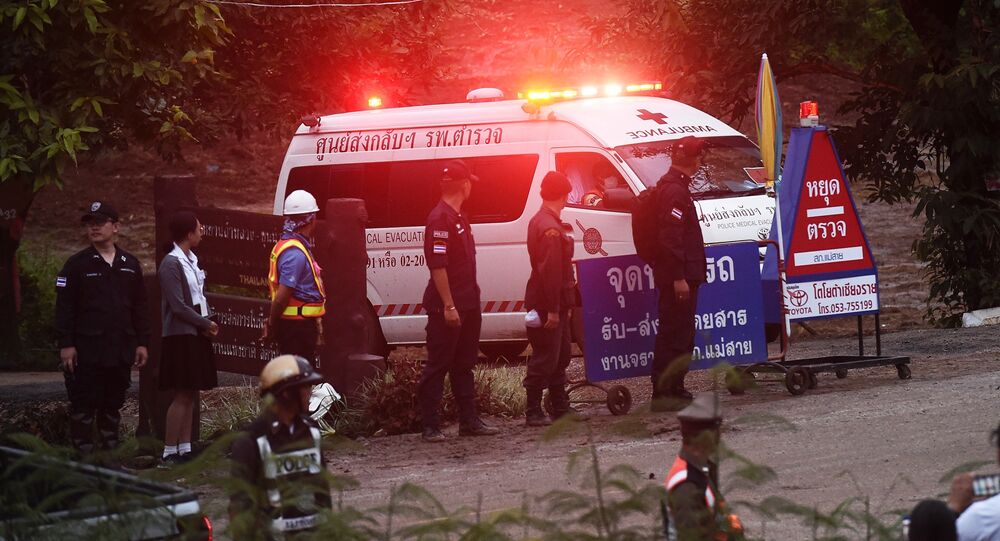 "Rescue workers need 'about 10 hours' to prepare for next operation," Thai head of the rescue operation said.

Four boys have been taken to hospital, a senior member of the rescue operation's medical team said, as quoted by Reuters.

Earlier a senior member of the rescue operation's medical team had said that six boys have exited a flooded cave in northern Thailand where they had been trapped for more than two weeks, according to Reuters.

"Four boys have reached chamber three and will walk out of the cave shortly," Lieutenant-General Kongcheep Tantrawanit said, referring to the area where rescue workers had set up a base.

It had earlier been announced that two boys from the trapped soccer team had been rescued from the cave.

The boys had to traverse more than four kilometers to get to the exit of the cave, according to Khaosod paper citing officials.

US President Donald Trump reacted to the situation in a tweet.

The U.S. is working very closely with the Government of Thailand to help get all of the children out of the cave and to safety. Very brave and talented people!

"Two kids are out. They are currently at the field hospital near the cave," said Tossathep Boonthong, chief of Chiang Rai's health department and part of the rescue team.

Two ambulances were seen leaving the cave in northern Thailand hours after the rescue operation began.

Thai media reported Saturday that a group of international divers was preparing an emergency rescue plan to guide the 12 boys and their football coach out of the waterlogged cave in which they have been trapped for more than two weeks.

The head of the rescue mission Narongsak Osottanakorn said Sunday "Today is the D-day. The boys are ready to face any challenges," AFP reported.

© REUTERS / Athit Perawongmetha
Thai Rescuers Drill Over 100 'Chimneys' into Mountain to Reach Trapped Soccer Team - Reports
Rescuers reportedly began the mission at 10 a.m. local time (03:00 GMT) and the extraction of the trapped soccer team and their coach would take many hours before the first boy would emerge from the flooded cave, Reuters reported, citing Narongsak Osottanakorn.

90 divers, 50 foreign and 40 Thai, were involved in the operation to remove the boys from the cave, the head of the rescue operation said.

The boys, aged 11-16, and their 25-year-old coach from the Thai youth soccer team "Wild Boar" had entered the massive cave network in northern Thailand when it was still dry, but heavy rainfall soon flooded the exit tunnel, stranding them in a chamber, miles inside the system.

Underscoring the perils they face, an experienced Thai Navy SEAL diver died late on Thursday after running out of oxygen and losing consciousness on his way back from a mission to deliver oxygen canisters.

© REUTERS / Jorge Silva
FIFA Invites Thai Youth Soccer Team Trapped in Thai Cave to World Cup Finals
Authorities initially suggested waiting until the end of the rainy season in fall, but rescuers now warn of the dwindling oxygen level and upcoming monsoonal rains that could flood the cave. However, Thai authorities have chosen the option of drilling the shafts through the mountain where the Tham Luang cave is located.

Narongsak Osottanakorn reportedly said Sunday that rescuers had to act immediately. Heavy rains could make the water rise to the shelf where the children were sitting, reducing the area to "less than 10 square meters," Osottanakorn said.

"There is no other day that we are more ready than today," Head of the rescue mission Narongsak Osottanakorn was quoted as saying by AFP. "Otherwise we will lose the opportunity."

On June 23, several hours after 12 members of a local football team and their coach entered the Tham Luang cave heavy rains began to pour, preventing them from leaving it.

The search for the boys and their coach went on for 10 days, after which they all were found alive.