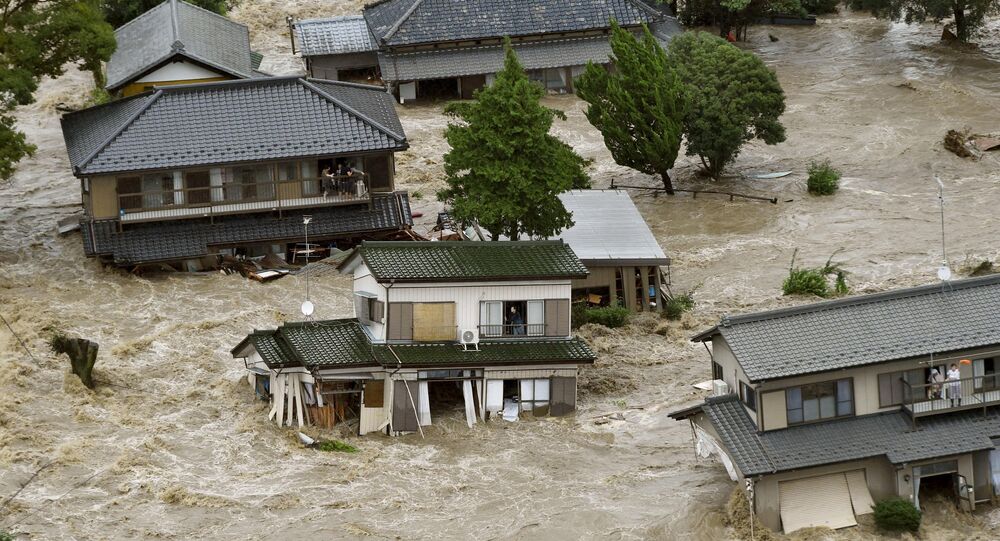 TOKYO (Sputnik) - The rainfall and subsequent flooding in Japan claimed lives of 46 people, while 48 more remain missing, the NHK broadcaster reported on Saturday.

Another five individuals are still unconscious, the NHK broadcaster reported. According to the news outlet, in the prefecture of Okayama the water level rose above the second floor, pushing houses' residents to occupy the buildings' roofs, while in Hiroshima Prefecture the flow of a flooded river drifted down a railway bridge.

Five deaths were recorded in the Hiroshima prefecture where rains caused rivers to burst their banks and triggered landslides, NHK reported.

In the Hyogo prefecture, a 59-year-old man was reportedly swept away by rainwater while cleaning pipes. In the Osaka Prefecture, a 52-year-old drowned in the river.

A total of 26,000 were advised to evacuate throughout Osaka after the storm made landfall in the country's southwest.

More than 100,000 people living in Kobe on Osaka Bay in central Japan were urged to prepare for evacuation. The measure was also recommended to 14,000 people in the Kyoto prefecture and 27,000 in Hyogo.

Lots of flooding in Hiroshima area of Japan after heavy rain across Japan. pic.twitter.com/p8386ugsGF

Earlier on Saturday, the Japanese government said that 48,000 employees of self-defense forces, police and fire service were engaged in rescue operations in the country.

Japanese Prime Minister Shinzo Abe characterized the situation in the regions affected by the rainfall as "extremely serious."