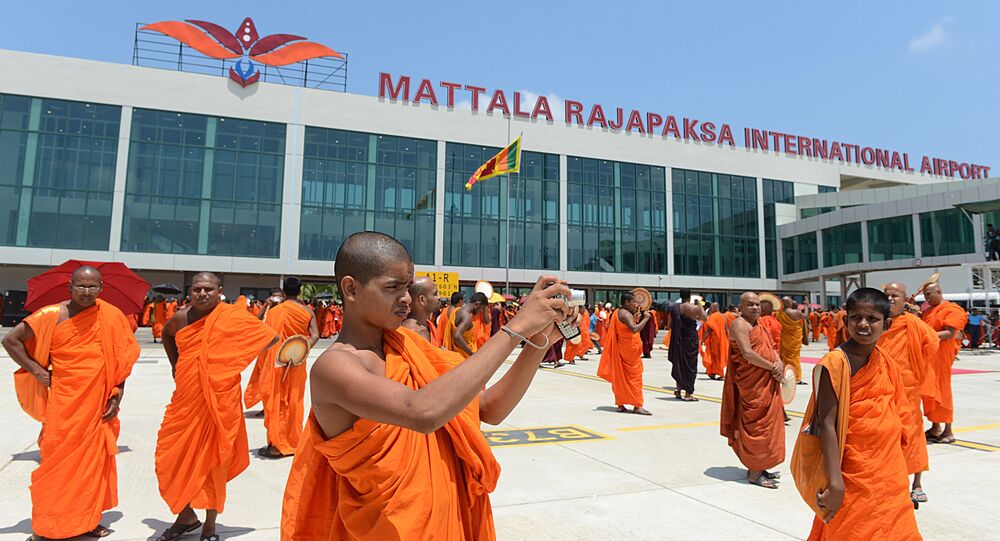 The loss-making airport in Sri Lanka currently has the capacity to handle one million passengers a year but has not been attracting much business. It is expected to handle five million passengers, 50,000 tons of cargo and 6,250 air traffic operations per annum by 2028.

New Delhi (Sputnik) — The Airports Authority of India (AAI) has agreed to bail out Sri Lanka's loss-making Mattala Rajapaksa International Airport in Hambantota, which adjoins a port leased to China by the island nation for 99 years.

"We need to revive this dying airport which caused a massive loss. The final terms of the agreement remain to be worked out," Nimal Siripala de Silva told the Parliament.

© AFP 2020 / LAKRUWAN WANNIARACHCHI
Chinese Operation of Strategic Sri Lankan Port Fuels Indian Consternation
The airport is part of a larger project funded by China that includes, apart from the airport, a seaport and an international cricket stadium in the small fishing town of Hambantota. The project was started in 2007 after then President Mahinda Rajapaksa invited Beijing to turn it into a new global shipping hub. But the plan got awry as the project was not able to attract much business.

"Only India offered to help us. Now we are in discussion with the Indians for the joint venture," de Silva said.

The aviation minister was responding to an adjournment motion initiated by the opposition that questioned whether the government was taking such a step to please India, which had opposed Sri Lanka's move of leasing out the Hambantota seaport to China.

© AFP 2020 / INDRANIL MUKHERJEE
Indian Ocean Region Could Be Heading for ‘Complexities’ if Chinese Presence Not Curtailed
In February this year, India's Ministry of External Affairs had said that India was keeping a constant watch on developments pertaining to India's security and economic interests and that it would take all necessary measures to safeguard it.

"India has taken up with Sri Lanka security issues, including in the regional context. We are hopeful that Sri Lanka will continue to keep in mind India's security concerns and sensitivities," VK Singh, India's minister of state for external affairs, said in the parliament.