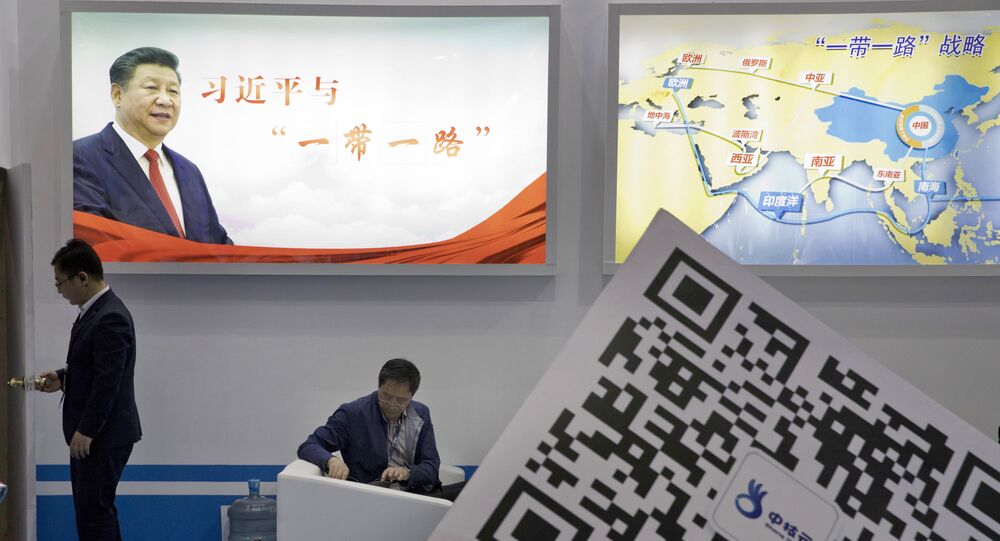 China's Ministry of Foreign Affairs and law society called on countries involved in the Belt and Road initiative (BRI) to improve international rules-based systems and establish dispute settlement mechanisms to fairly protect the rights of all parties, according to a statement from a forum on BRI legal cooperation.

Legal cooperation, which is indispensable to international cooperation under the BRI, should be developed on the basis of "extensive consultations, joint contributions and shared benefits," according to a statement released on Tuesday.

The parties participating in the BRI are encouraged to promote laws to enhance cooperation related to financing, taxation, transportation, intellectual property rights, labor and counter-terrorism.

© Sputnik / Iliya Pitalev
Getting DPRK Onboard Belt & Road Initiative Might Be Easier Than Expected
The statement also proposed the establishment of treaty-based mechanisms or institutions to prevent and resolve disputes and to strengthen mutual recognition and enforcement of judgments in civil and commercial matters, and establish an online platform that provides information on foreign laws and judicial cases.

Kong Xuanyou, vice minister of Foreign Affairs of China, and Chen Jiping, executive vice-president of China Law Society, are co-chairs of the forum.

Government officials and experts attending the forum said that dispute settlement mechanisms and results under the BRI should be transparent and fair to all countries.

Han Kok Juan, deputy secretary of Singapore's Ministry of Law, said at the forum that the dispute settlement mechanism has to be trustworthy, its rules have to be professional, fair and transparent, and it must be neutral if it is to enjoy international credibility.

© AP Photo / Andy Wong
Russia Considers China's 'One Belt, One Road' Initiative Important, Promising
He said that Singapore is willing to work with China and other countries to develop a dispute settlement mechanism to support BRI's further development.

Qu Guangqing, president of Quanzhou Normal University in East China's Fujian Province who attended the forum, told the Global Times that to ensure fairness and transparency, dispute settlement mechanisms should be established and led by third-party international organizations rather than dominated by one country.

"China in the meantime could sign bilateral treaties with other countries to improve efficiency and prevent and solve disputes," Qu said.

The forum, jointly held by the Ministry of Foreign Affairs of China and the China Law Society, attracted more than 350 delegates from governments, international organizations and academic institutions.

"Chinese enterprises should abide by local laws and related labor regulations, so that local people and governments won't be resistant to the BRI," Qu said.

The BRI is still at an early stage and some countries and some people "use political eyes" to see it, making it crucial to form a consensus on the laws that will be used to govern projects in other countries, Wang Junfeng, president of All China Lawyers Association, said at the forum.

Avelino V. Cruz, President of the ASEAN Law Association, said the forum could ease many countries' concerns, such as suspicions that China is leveraging access to resources for strategic interests.

"I believe that these concerns pale in comparison to BRI's impressive prospects for ASEAN nations, because of its unprecedented scale and potential," Cruz said.

© AP Photo / Andy Wong
Lack of Funds Will Not Hamper Belt and Road Initiative - Academic
Although China and some ASEAN countries have unresolved maritime disputes in the South China Sea, they won't weaken ASEAN countries' enthusiasm to cooperate with China on BRI, Cruz told the Global Times in an exclusive interview Tuesday.

Cruz said that China and ASEAN countries have decided to proceed with negotiations on the Code of Conduct (COC) in the South China Sea.

"Once the COC is in place, there will be no problem," Cruz said.

Chinese Premier Li Keqiang said at the 20th China-ASEAN (10+1) leaders' meeting in Manila in November 2017 that he hopes all parties will adopt the COC at an early date and make it a stabilizer of peace in the South China Sea, the Xinhua News Agency reported.

© Sputnik / Sergey Guneev
Sino-Russian Cooperation, Exchange Increase Under Belt and Road Initiative
Countries like the Philippines have been friendly with China, and Cruz believes that tensions brought by the maritime disputes have been relieved.

Getting DPRK Onboard Belt & Road Initiative Might Be Easier Than Expected

Lack of Funds Will Not Hamper Belt and Road Initiative - Academic