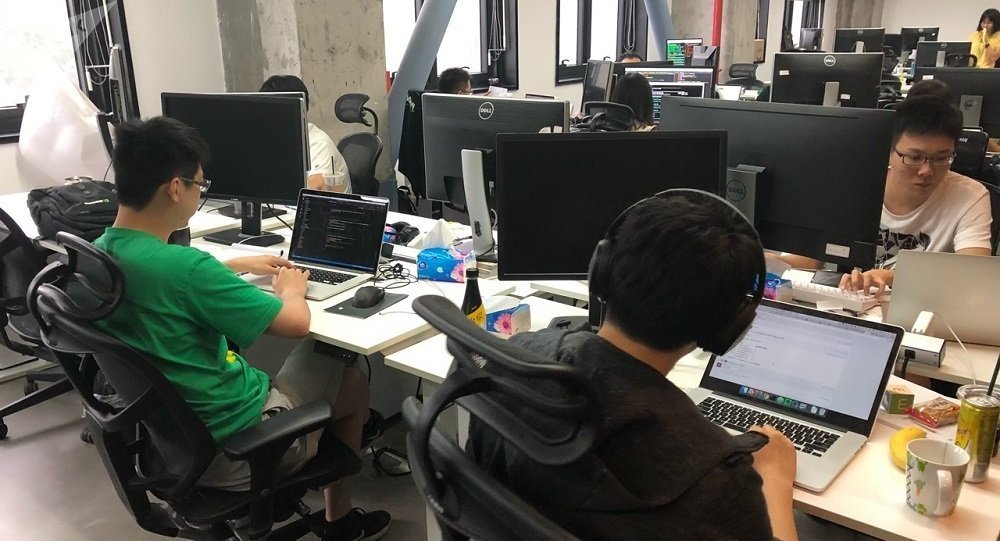 "We do not steal intellectual property, so Trump's claims don't worry us," senior PR-manager of the Chinese company Liulishuo, Larry Se, told Sputnik. The company is the world's leading Artificial Intelligence + Education company. Last year it raised $100 million in funding and is planning to open a research lab in Silicon Valley.

Liulishuo's office is located on the premises of a former textile factory in Shanghai. The textile factory has been replaced by a fashionable business incubator Yangpu — something similar to Zhongguancun in Beijing or Moscow's Skolkovo. There's no special dress-code here, young employees of the 80's and 90's generation sit behind their MacBooks in jeans and baggy T-shirts while sipping coffee from Starbucks. There's a kitchen and next to it there's a small gym. Representatives of Liulishuo explain: the atmosphere should be homely, because people here have creative work, so nothing should limit their ideas and thoughts. 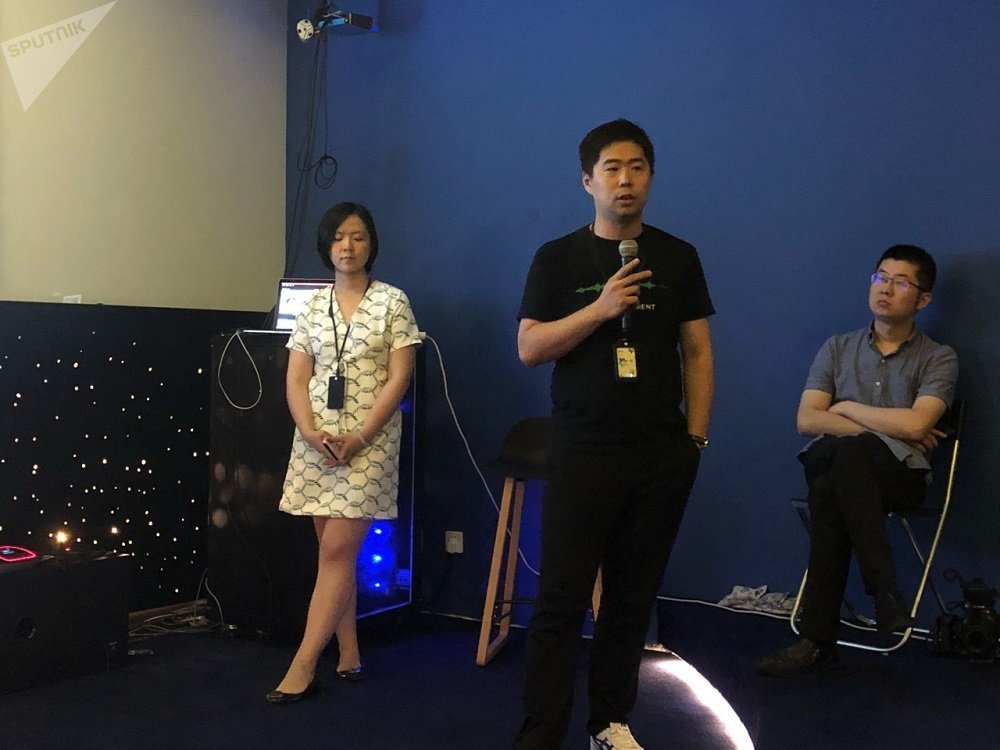 © Sputnik / L. Kovachich
Chinese company Liulishuo
The approach here, really, needs to be creative: employees have to come up with new algorithms for Artificial Intelligence, which, in turn, must teach people. Liulishuo is the developer of a mobile application for learning English. The program offers to pass a small test and determines the approximate level of English language proficiency in order to create a tailor-made training plan. The emphasis is mainly on phonetics, perhaps, because it the hardest aspect for the Chinese people. The program offers to read out sentences in English, and each time comes up with new ones containing words that are pronounced the worst. However, there are also grammar and vocabulary exercises in the programme.

The developers promise: to advance to the second level and with varying success to speak English, which they hope a person will be able to do after 38 hours of online classes starting from the beginner level. How effective the innovative method is, is difficult to say. However,  Sputnik's correspondent was surprised by the excellent American English pronunciation of Liulishuo employees.

The founder of the company Yi Wang holds a PhD in computer science from Princeton University and worked as a product manager at Google, and only then decided to use his experience at Liulishuo. Investors believe in him: last year the company closed an approximately $100 million in Series C funding. And there were grounds for it: Liulishuo has registered almost 70 million users, the company's capitalization is growing. While the main think tank of the company is in Shanghai, in order to ensure that the company’s product  of the company was is not intended purely for internal use, AI and education should be developed in an international atmosphere, that's why Liulishuo is planning to open a research laboratory in Silicon Valley.

© Sputnik / L. Kovachich
Chinese company Liulishuo
However, this ise it's not the best timing. US President Donald Trump has ordered tariffs on Chinese goods worth $50 billion and in case of Chinese retaliation — another $200 billion. Moreover, the rhetoric of the American president has changed because if in the spring Trump's emphasis was on reducing the trade imbalance between China and the US, now he has lashed out at the alleged unfair Chinese industrial policy aimed at China becoming the leaders in the field of high technologies due to intellectual property theft from the US. Trump says that Chinese investments in US technology companies and the presence of Chinese companies in the US market should be limited. However, Liulishuo is not scared off by this situation. They open their company in the US and give jobs to Americans, so Trump's claims are not relevant to them, Larry Se explained to Sputnik.

"We are not a manufacturing company, which, for example, produces chips, smartphones, etc. And we do not steal intellectual property. We are engaged in the development of science. We only need specialists who are engaged in research, scientific results. We gather the best talents who want to live and work in the USA. We register a separate company in the US that operates in US jurisdiction under US law. And we give work to these talented people. So we have nothing to do with what Trump claims."

Other large Chinese technology companies have followed this path. Several years ago Baidu opened a research center in Silicon Valley (Silicon Valley Artificial Intelligence Lab). In 2017, the company also opened a second center for research and development of self-driving cars for its Apollo project. Soon after a third laboratory of the company in the US — Business Intelligence Lab — on research and processing of Big Data was opened. Another Chinese social media and gaming giant, Tencent, opened an Artificial Intelligence research center in Seattle.