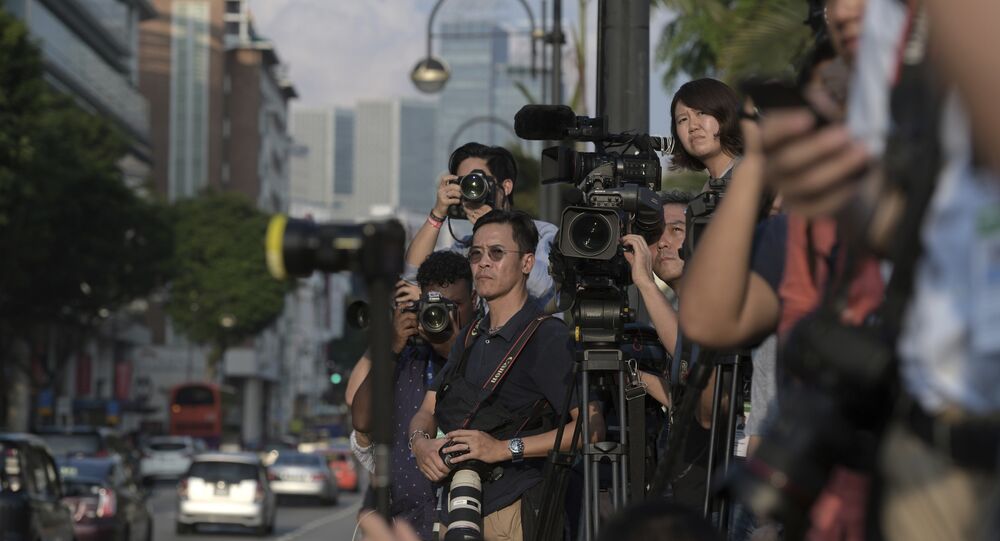 Singapore's Ministry of Communications & Information (MCI) said in an email sent to the Global Times on Wednesday that, "The USB fans were contributed by Sentosa Development Corporation (SDC). They were but one item in goodie bags comprising a range of goods and information sheets from various partners," and "MCI and SDC have confirmed that the USB fans are simple devices with no storage or processing capabilities."

© REUTERS / Jonathan Ernst
Ex-UN Envoy: Trump-Kim Summit Was 'Spectacle', Real Work Has Still to Be Done
"The USB fans were part of SDC's ready stock of collaterals, originally meant for Sentosa Islander members. SDC had assessed the USB fans to be a handy and thoughtful gift for the media, who would be working in Singapore's tropical climate," MCI said in the email.

A Global Times reporter opened the USB fan to see the inside components, and found that the fan consists of fan blades, a small electric motor, a USB wire with iPhone and Android plugs, and is powered by the device into which it is plugged.

However, several foreign media outlets, including France's RFI and US online magazine The Federalist, reported that this small USB fan is an espionage device for spying on all journalists who came to Singapore for the summit, and the only reason they provided is "this is made in China."

© AP Photo / Jo Kearney
Heathrow Airport Top Secret Data Reportedly Found on USB Stick Left in Street
Apart from imagination and conjecture, no hard evidence has been provided at all.

"How could they produce such ridiculous news? You can see this kind of electronic product everywhere in Singapore because the weather here is very hot, and most of them are made in China.

Is this a reason for us to worry every day?" a Singaporean journalist who asked for anonymity laughed at the irresponsible report.

This artcile was originally published in Global Times