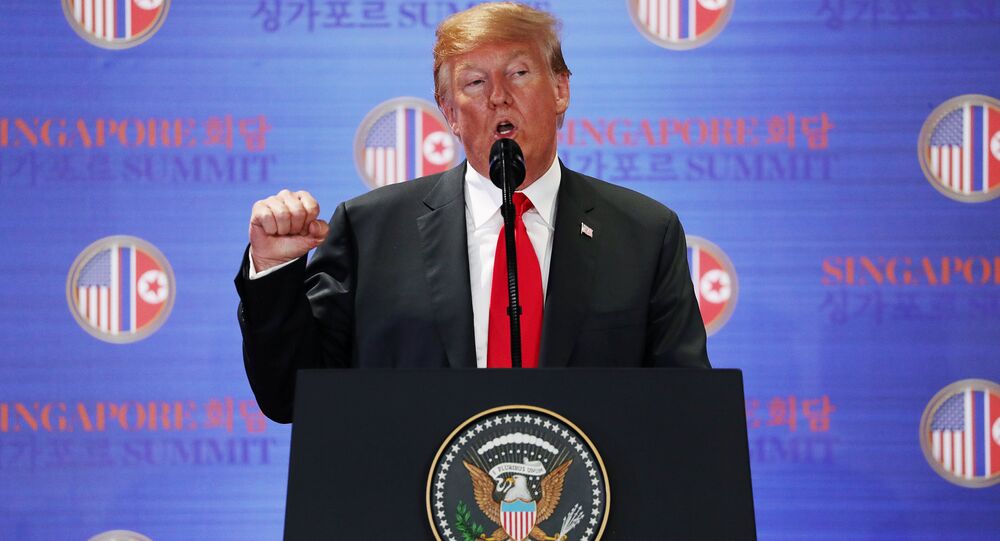 Trump claimed during a rally in Minnesota that Pyongyang was pursuing a path of denuclearization and had "stopped everything we wanted them to stop," adding that he and Kim Jong-un had "great chemistry" during the summit in Singapore on June 12.

According to the US president, North Korea has destroyed four major test sites, honoring its commitments to the denuclearization of the Korean Peninsula. However, Trump didn't specify which or what kind of sites he was referring to — nuclear or missile.

"They've stopped the sending of missiles, including ballistic missiles. They're destroying their engine site. They're blowing it up. They've already blown up one of their big test sites, in fact, it's actually four of their big test sites," he claimed at a meeting of his Cabinet at the White House, adding that there would be "total denuclearization," which had already "started taking place."

© AP Photo / Jesco Denzel
'Hey, Angela': Trump Allegedly Threw Candy at Merkel at G7 Summit
Earlier in the day, the US president stated that Pyongyang had returned the remains of US soldiers missing since the end of Korean War in 1953, in order to de-escalate tensions between the two countries.

Previously, on Wednesday US Defense Secretary Jim Mattis told reporters that he was not aware of any North Korean actions on the issue.

"The detailed negotiations have not begun. I wouldn't expect that at this point," he stated, stressing that "it's the very front end of a process."

The de-escalation became possible after Trump and North Korean leader Kim Jong-un attended a historic summit on June 12 in Singapore, where they issued an agreement that required Pyongyang to denuclearize in exchange for a freeze on US-South Korean military drills and eventually the lifting of sanctions.

Pyongyang Has Returned Remains of 200 Fallen US Soldiers – Trump