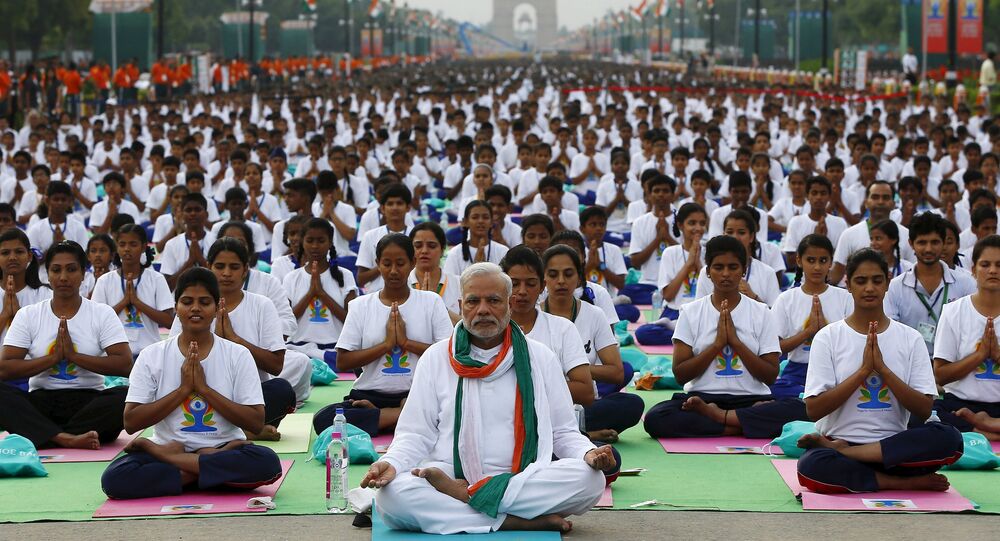 Greeting yoga enthusiasts across the world on International Day of Yoga, Indian Prime Minister Narendra Modi has claimed that yoga has become the biggest mass movement and it has shown the world the path from illness to wellness.

New Delhi (Sputnik) — Leading an enthusiastic crowd of around 50,000 people in the hill-town of Dehradun, Indian Prime Minister Narendra Modi hailed the practice of yoga as a unifying force.

"Yoga has emerged as the biggest unifying force in the world," Modi said leading the main event to mark the fourth International Day of Yoga at the campus of the National Forest Research Institute in the northern state of Uttarakhand.

The United Nations had unanimously declared June 21 as International Day of Yoga after Indian Prime Minister Narendra Modi vouched for the effectiveness of the ancient Indian health discipline during the 2014 UN General Assembly.

​Leading the yoga session in Dehradun, the  Indian Prime Minister declared "From Dehradun to Dublin, Shanghai to Chicago, Jakarta to Johannesburg, yoga has become a positive influence in the lives of millions."

​Personal of the Indian Navy participating in Malabar military exercises with the Japanese and US navies off Guam in the Pacific Ocean performed yoga on board the warships, according to PTI.

India Gears Up to Celebrate International Yoga Day on June 21