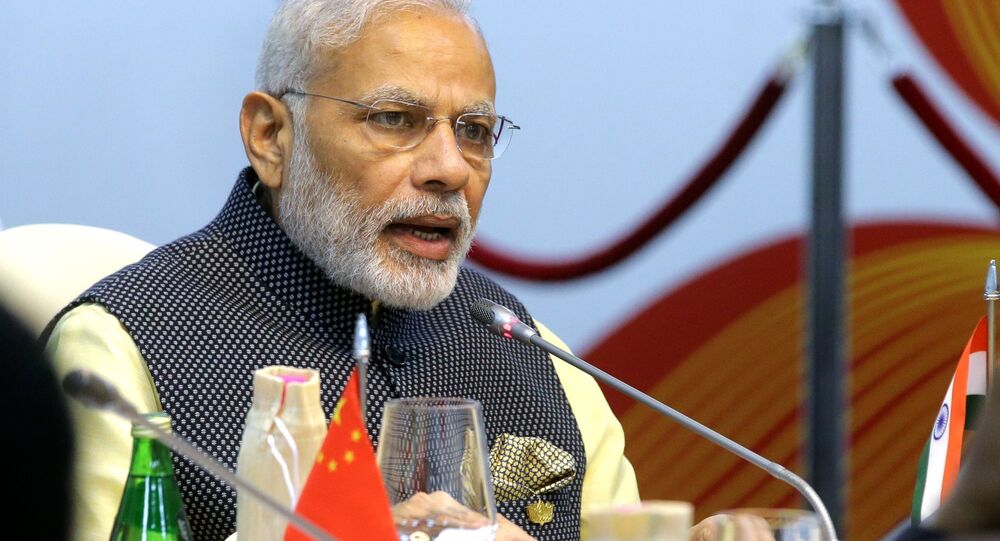 New Delhi (Sputnik) — Indian Prime Minister Narendra Modi is set to lose one of his most trusted economic brains with Arvind Subramanian, the chief economic adviser of the country's finance ministry, deciding to quit the job months before his tenure ends.

Finance Minister Arun Jaitley announced on Wednesday that Subramanian, a former economist at the International Monetary Fund, would return to the US for family-related reasons.

"He (Arvind Subramanian) informed me that he would like to go back to the United States on account of pressing family commitments. His reasons were personal but extremely important to him. He left me with no option but to agree with him," Arun Jaitley informed through his blog.

My statement on the announcement of my departure from the job of CEA. pic.twitter.com/4slYcujugO

Subramanian has been the chief economic adviser since October 2014 and his term was scheduled to end in May 2019.

© Sputnik / Alexei Maishev
Modi, Putin Agree on Economic Ties Between Indian Think Tank, Russian Ministry
Subramanian is the third senior rank economist to return to the US after leaving the Narendra Modi-led government. Last August, Arvind Panagariya, professor of economics at Columbia University, had quit the job of vice chairman of NITI Aayog — India's topmost policy think tank — before completing his term and Raghuram Rajan, professor of finance at the University of Chicago Booth School of Business, had decided to leave refusing an extension after his three-year term ended as RBI governor in 2016.

India's primary opposition party has blamed the government's mismanagement of the economy for the reluctance exhibited by top economists to continue assisting the government.

Soon after the resignation of Subramanian, the Swadeshi Jagran Manch- sister body of ruling Bharatiya Janata Party and an influential fringe group advocated the nomination of an Indian economist for the job who can understand rural India's desires and problems.

"As CEA Arvind Subramanian has resigned citing personal reasons and has said he will move to the US, Swadeshi Jagran Manch requests Prime Minister Narendra Modi to see that next incumbent should be one who has faith in farmers, workers, and entrepreneurs of Bharat (India) and is not on sabbatical," Ashwani Mahajan, national co-convener, Swadeshi Jagran Manch said.

India to Rejoin Talks for Eastern Economic Corridor With China