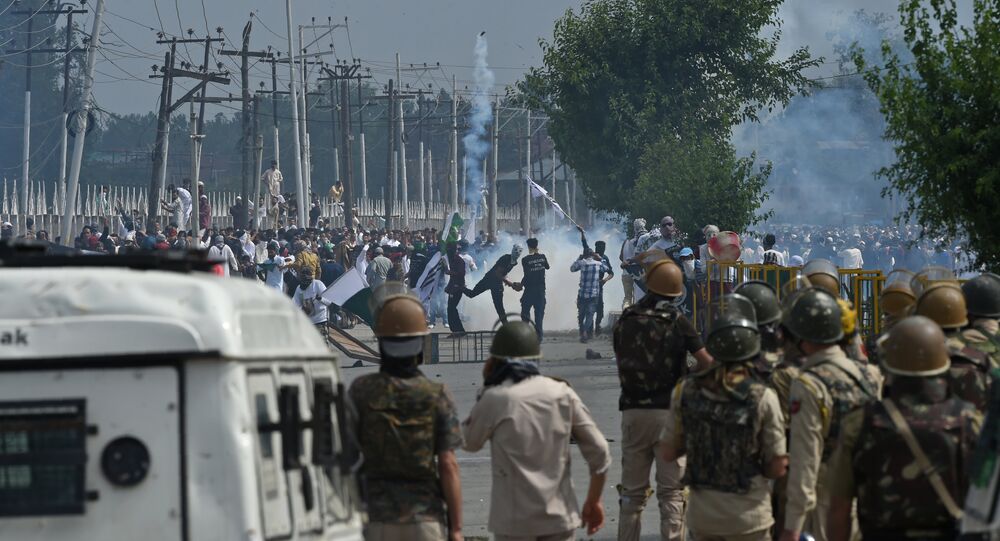 The Hindu nationalist Bharatiya Janata Party (BJP) announced an unlikely alliance with the regional Peoples Democratic Party (PDP) in 2014 after the state assembly elections resulted in an unclear mandate.

New Delhi (Sputnik) – India's ruling BJP withdrew support from the Jammu and Kashmir coalition government on Monday after it claimed that the security situation in the state has worsened beyond repair.

"It has become untenable for the BJP to continue in the alliance government in Jammu and Kashmir," Ram Madhav, party general secretary, told reporters.

Ram Madhav in BJP Press Conference.: Keeping national interest in mind and that Kashmir is an integral part of India, we have to say it is time that the reins of power in the state be handed over to the governor.
#JammuAndKashmir pic.twitter.com/CCA7vaHW2p

With the withdrawal of the BJP and the resultant collapsing of the elected government in light of a lack of a majority of seats in the state assembly, the Governor will be in charge of the state's administration until a new government is formed.

"Keeping in mind that Jammu and Kashmir is an integral part of India and in order to control the prevailing situation in the state, we have decided that the reins of power in the state be handed over to the Governor," Madhav added.

© AP Photo / Channi Anand
Militancy Becoming 'Cult' in Jammu and Kashmir - Former Top Cop
The BJP's decision comes after India's Ministry of Home Affairs announced the resumption of military operations in Jammu and Kashmir as the holy Islamic month of Ramadan ended on Sunday. Since Sunday, security forces have started cordon-and-search and search-and-destroy operations in the restive state to prevent terror attacks.

"Whatever has happened is good. People of Jammu and Kashmir will get some relief. They (BJP) ruined Kashmir and have now pulled out. A maximum number of civilians and army men died during these three years. That question does not arise (on forming an alliance with PDP)," Ghulam Nabi Azad, senior leader of the Indian National Congress, country's main opposition party said.

The Narendra Modi-led government at the center was under serious strain over its failure to tackle terrorism in Jammu and Kashmir and a growing number of deaths of security personnel in the Kashmir valley. Last week, one of Kashmir's senior-most journalists Shujat Bukhari was shot dead by unknown assailants in front of his office in Srinagar, the capital city of Jammu and Kashmir.

Some analysts have observed that by withdrawing support from the local government, the BJP intends to stir the Kashmir militancy and anti-Pakistan rhetoric to stir passions in the run-up to the general elections.

"Now the BJP strategy might be an all-out effort under Governor's rule to crush terror on either side of the border. After all, 2019 is not far off! In any case, a heightened Kashmir and anti-Pak rhetoric will be a useful distraction from domestic economic issues," MK Venu, senior journalist and founding editor of thewire.com said.

After seeing Kashmir political situation reach its 15 year low, BJP is washing it's hands off by withdrawing from J&K govt. BJP can't absolve itself of its share of responsibility. Is this BJP's commitment to democracy in J&k?