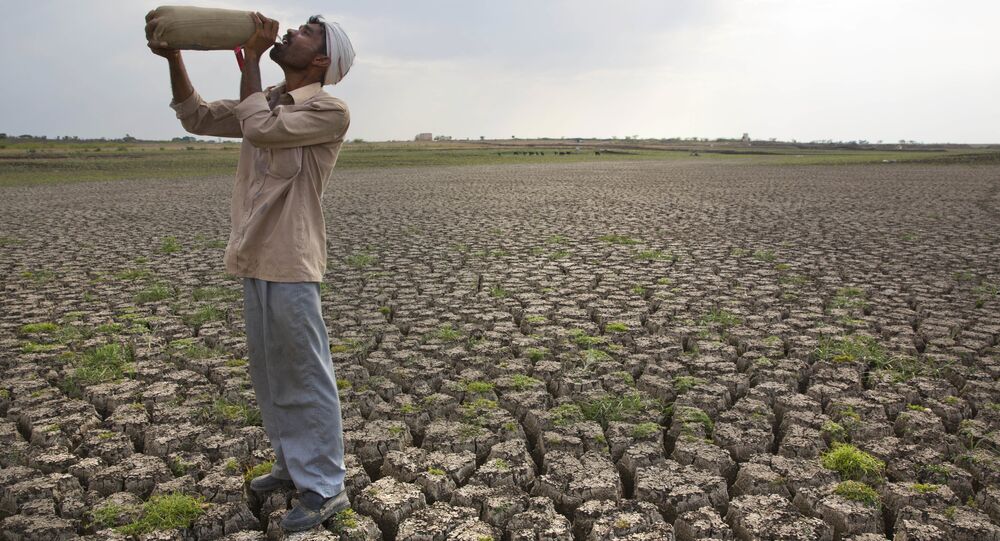 Critical groundwater resources – which account for 40% of India's water supply – are being depleted at unsustainable rates, says a report of India’s policy think tank.

New Delhi (Sputnik) — A comprehensive report published by the NITI Aayog, the Indian government's main policy think tank, indicates that at least two hundred thousand Indians die every year due to inadequate access to potable water. According to the new projections, the crisis is going to continue to worsen until 2030, leading to an eventual 6% loss in the country's national income.

"India is suffering from the worst water crisis in its history and millions of lives and livelihoods are under threat. Currently, 600 million Indians face high to extreme water stress and about 200,000 people die every year due to inadequate access to safe water," says NITI Aayog.

NITI Aayog has developed the Composite Water Management Index (CWMI) to enable effective water management in Indian states in the face of the growing crisis.

Among the states of India, Gujarat is the best performer in the #WaterIndex, closely followed by Madhya Pradesh, Andhra Pradesh, Karnataka, Maharashtra & Telangana.

The Composite Water Management Index (CWMI) is a first-of-its-kind, comprehensive scorecard for identifying, targeting, and solving problems in the water sector across the country.

© AP Photo / Patrick Semansky
Peak Sand? Global Shortage of Key Resource Could Doom Key Asian Infrastructure Projects
As per the report, the situation is worse in the northern part of the country, with 21 major cities expected to run out of groundwater as soon as 2020, affecting around 100 million people.

The report also highlights the grave problem in rural India, wherein around 70% of country's population, approximately 800 million people, reside. Currently, only half of the rural population has access to safely-managed water, which is far behind China and Bangladesh, resulting in among of the highest disease burdens due to water-borne diseases in the developing world.

NITI Aayog has termed this as "one of the largest service delivery challenges in the world in terms of scale."

Niti Aayog reports that our Jharkhand state is one of the bottom 5 states on Water Resource Management.

No wonder, this summer, our Ranchi saw unprecedented water shortage crisis and this grave situation is likely to get worse in coming future.

While urban water access is high on average, significant gaps remain across the country, and wastewater treatment remains stuck at the national average of approximately 33%.