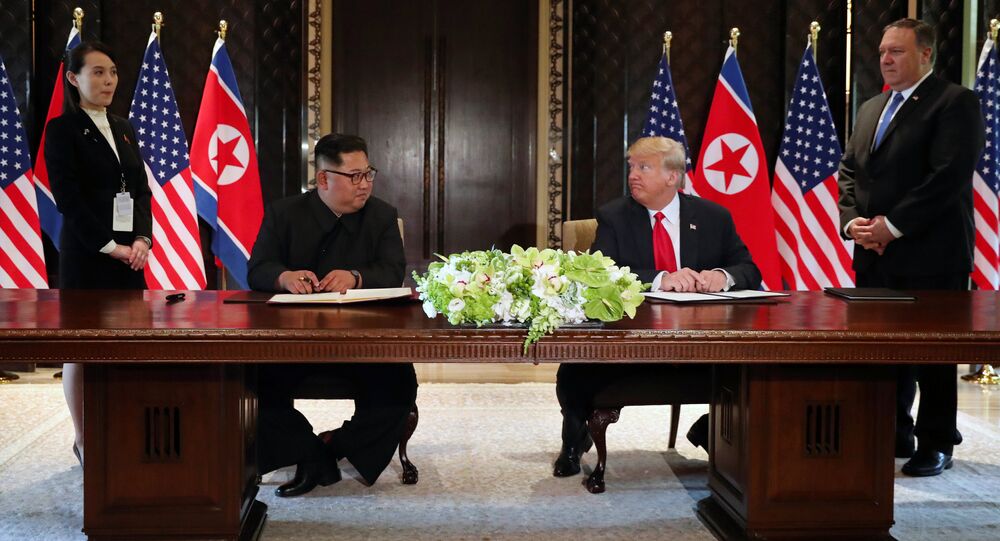 WASHINGTON (Sputnik) - The agreement reached between US President Donald Trump and North Korean leader Kim Jong-un after a historic summit in Singapore is the direct result of Trump's courageous leadership, Trump campaign senior advisor Lara Trump said in a statement.

"History will demonstrate that the historic summit with North Korean leader Kim Jong-un, and the initial agreement to denuclearize the Korean peninsula, was an end product of President Trump's bold and vigilant leadership on behalf of the American people," the statement said.

Trump has achieved more than expected by convincing Pyongyang to destroy its missile testing site and repatriate the remains of US prisoners of war or missing in action after the 1950-1953 war, Trump campaign senior advisor Lara Trump noted.

© REUTERS / Kevin Lim/The Straits Times
Trump Fails, Kim Scores Easy Victory Without Denuclearization Roadmap - Scholars
The statement added that this agreement is yet another reason why the American people were right to elect Trump in 2016 in order to change the "course and direction" of the country.

On June 12, Trump and Kim signed an agreement committing to establish new bilateral relations and building a lasting peace on the Korean Peninsula. Pyongyang also reaffirmed its commitment to the denuclearization, while the United States pledged to provide security guarantees.

Here's the Long, Bumpy Path That Led to the Trump-Kim Summit