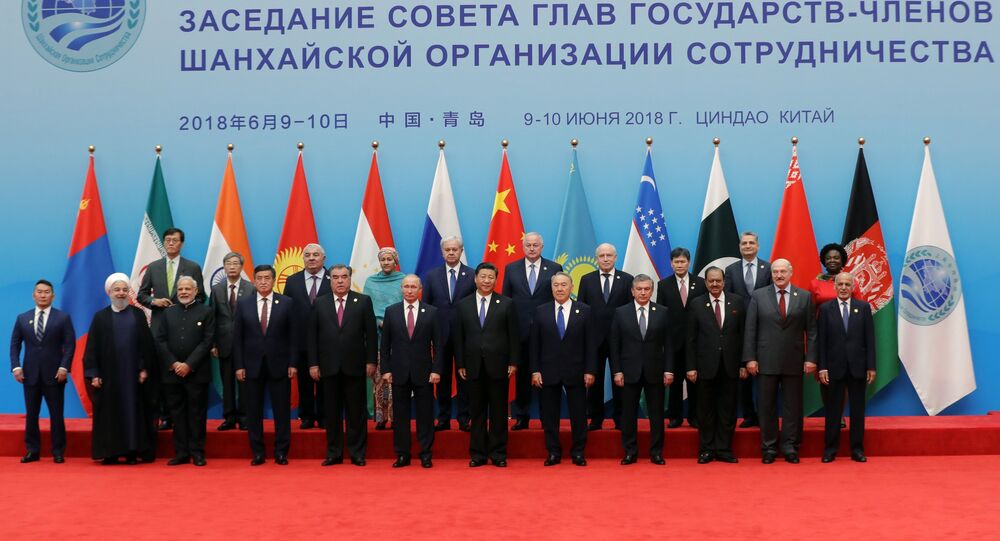 Chinese FM Calls on SCO Countries to Avoid 'Fencing Themselves Off'

BEIJING (Sputnik) - The Shanghai Cooperation Organization (SCO) must continue to adhere to its fundamental principles, not to become closed in on itself and to avoid geopolitical games, Chinese Foreign Minister Wang Yi said Monday.

"All member states of the organization should continue to adhere to Shanghai spirit, to bear a banner of peaceful development and cooperation, to avoid closing in a small grouping, fencing themselves off from others, to avoid engaging in small-minded geopolitical games. It is necessary to promote the construction of international relations based on mutual respect, justice and mutual benefit," Wang Yi said.

© Sputnik / Vladimir Pirogov
Fight Against Terrorism Remains Priority for Cooperation Within SCO - Putin
He stressed that the SCO should adhere to the principles that were laid during the creation of the organization, in particular, non-targeting against other countries and international organizations.

"We believe that the SCO should maintain healthy and stable development, consistently implement the general consensus reached by the countries' leaders at the summit in Qingdao," the Chinese minister added.

© Sputnik / Alexei Danichev
SCO Leaders Believe 2018 World Cup in Russia Can Promote Peace, Friendship
The SCO leaders also signed a decision to approve the SCO Antidrug Strategy and the Programme of Action to implement this strategy. The Concept to Prevent the Abuse of Narcotic Drugs and Psychotropic Substances has become yet another important document in the field of drug control signed by SCO member states.

The SCO, established in 2001, comprises Russia, China, Kazakhstan, Kyrgyzstan, Tajikistan, Uzbekistan, Pakistan and India as permanent members. Afghanistan, Belarus, Iran and Mongolia hold the observer status, while Armenia, Azerbaijan, Cambodia, Nepal, Turkey and Sri Lanka have the status of dialogue partners. The organization's key goals include cooperation in the area of the international security and counterterrorism.

The SCO summit was held in the Chinese city of Qingdao on June 9-10.

Fight Against Terrorism Remains Priority for Cooperation Within SCO - Putin