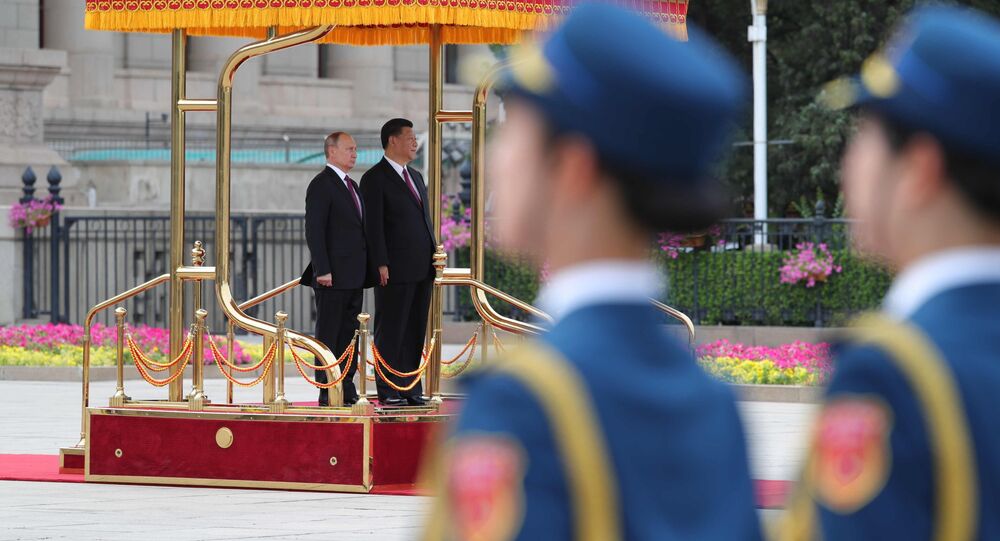 Russian President Vladimir Putin embarked on his three-day state visit to China on Friday and held talks with Chinese President Xi Jinping in Beijing during which the two parties discussed a number of international and the full range of bilateral issues.

Putin said, following the meeting, that the negotiations were held in a constructive and business-like environment, which enabled a substantive exchange of views on the current state and prospects of bilateral relations.

Following the talks between the two presidents and the announcement of a joint statement, the delegations of the two countries signed a package of documents, which formalized the agreements reached by Putin and Xi.

After the negotiations a solemn ceremony was held during which Putin became the first foreign leader to be awarded China's newly established Order of Friendship. The gesture commended Putin's attention to the development of Russian-Chinese relations, which, according to Xi, would never reach such a level without Putin's personal contribution.

The joint statement adopted following Putin-Xi talks not only set out the position of the two countries regarding concrete foreign policy issues but also their general perceptions for international relations.

Thus, the two countries expressed their opposition to any unilateral military operations in the absence of a UN mandate.

"The sides will… stand for preservation of main responsibility of the UN Security Council for strengthening of international peace and international security, resist attempts of any states to carry out unilateral military operations without a relevant UN mandate, or without the consent of a legitimate government of a country, where such operations are held," the joint statement said.

© Sputnik / Alexei Nikolskyi
Xi, Putin to Headline SCO
The two parties have also pledged to oppose any economic sanctions adopted in disregard of the UNSC as well as measures violating the principles of fair competition.

Russia and China agreed to take steps to counter protectionist measures in trade as part of the work to preserve and strengthen the World Trade Organization.

Besides, the joint statement revealed the plans of Moscow and Beijing to increase their mutual support for each other in international affairs.

"The parties affirm that they will continue to deepen the Russian-Chinese relations of comprehensive partnership and strategic cooperation regarding all the issues of the bilateral agenda and intend to elevate qualitatively the level of coordination and mutual support in international affairs," the joint statement summarized.

Apart from a general declaration, the joint statement also dealt separately with each of the international urgent issues.

Speaking about North Korea, the two presidents agreed to continue coordinating efforts to peacefully resolve problems on the Korean peninsula.

"We discussed the situation on the Korean peninsula. Russia and China are interested in establishing peace and stability on the peninsula and Northeast Asia in general. It is encouraging that the inter-Korean negotiation process, which has been launched, is advancing in the line with the Russian-Chinese roadmap for the settlement," Putin said following the talks.

Putin and Xi also decided to coordinate efforts and concrete steps in the countries of the Middle Eastern region. In particular, the two presidents announced their intention to encourage the achievement of peace and stability in Afghanistan.

"[The parties agreed] to cooperate with other countries of the region to encourage the intra-Afghan settlement and the rehabilitation of Afghanistan without overlooking the need for the activation of the fight against terrorism," the statement read.

With regard to the situation with the Iran nuclear deal, Putin and Xi pledged to exert maximum efforts to preserve the Joint Comprehensive Plan of Action (JCPOA) on Iran's nuclear program, and stressed the importance of protecting trade cooperation with Tehran from unilateral sanctions.

Xi and Putin have also expressed their concern over certain states' unilateral deployment of missile defense systems in Europe and the Asia-Pacific region under the pretext of an alleged missile threat.

"The sides… will pay special attention to ensuring global and regional strategic balance and stability, including taking into account the fact that some states, under the pretext of the so-called 'missile threat,' unilaterally develop missile defense systems and deploy them in Europe and the Asia-Pacific region, thereby severely damaging the strategic security interests of regional states, including Russia and China, and negatively affecting the strategic equilibrium, global and regional safety and stability," the statement said.

Russia and China also plan to promote the development of instruments that will prevent the weaponization of outer space, according to the statement.

In addition, the two parties agreed to enhance contacts and coordination between the Russian and the Chinese armed forces.

The negotiations between Putin and Xi have also paved the way for the conclusion of a number of agreements between the state agencies of the two countries.

© Sputnik / Sergey Guneev
Putin and Xi Jinping Enjoy Ride on Brand-New High-Speed Train
Thus, the Russian and the Chinese governments signed an agreement on international automobile traffic, while the Russian Economic Development Ministry and the Chinese National Development and Reform Commission have signed a memorandum of understanding on further strengthening of investment cooperation.

Besides, the Russian Economic Development Ministry and the Chinese Commerce Ministry signed a joint declaration on a feasibility study of the Eurasian economic partnership agreement and a memorandum of understanding on cooperation in electronic commerce.

Another important agreement was reached between the Russian space corporation Roscosmos and the China National Space Administration. The two sides agreed to cooperate in lunar and deep space exploration.

Other major accords covered the area of the peaceful use of nuclear energy and rail transportation.

The increase of trade and investment in national currencies as well as the development of cooperation in such areas as payment systems and insurance has become another major decision taken following Putin-Xi talks.