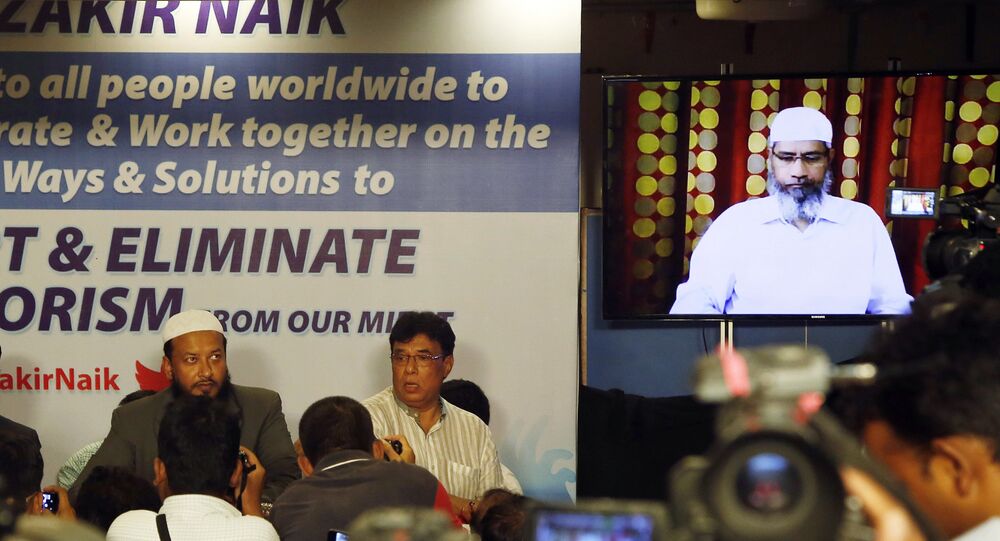 Indian authorities accuse Zakir Naik, an Islamic orator and founder of the Islamic Research Foundation (IRF), of money laundering and inciting youths to take up arms in the name of jihad. He is also believed to have inspired the terrorists who hacked to death 20 people in Bangladesh's Dhaka Cafe in July 2016.

New Delhi (Sputnik) – India is awaiting a response from Malaysia after it made an official request for the extradition of Zakir Naik, according to the Indian Foreign Ministry. Naik, a controversial Islamic orator and founder of the Islamic Research Foundation (IRF), is wanted in India in connection with his role in a terrorist attack in Bangladesh and cases of money laundering and hate speech.

"India and Malaysia have an extradition treaty and we have made an extradition request to Malaysia, we are waiting for their response in this matter," Indian External Affairs ministry spokesperson Raveesh Kumar told the media.

India and Malaysia have an extradition treaty and we have made a extradition request to Malaysia, we are waiting for their response in this matter: Raveesh Kumnar, MEA on extradition of Zakir Naik pic.twitter.com/mVnaR05LZj

© Wikipedia /
India Slaps Five-Year Ban On Fiery Islamic Preacher for Hate Speeches
The Indian move follows news reports quoting Malaysian Home Minister Tan Sri Muhyiddin Yassin, who said that the controversial preacher is subject to the laws if he had committed a crime.

"Whether you are a Malaysian or non-Malaysian, you are subject to the laws in the country. If someone violated the law, no matter who they are, action will be taken in accordance with the law. I was informed that he was given the 'permanent resident' status by the previous government. Hence, he needs to follow the laws in the country, whether it involves the issue of religion or crime, he will not be spared," Malaysian Home Minister Tan Sri Muhyiddin Yassin told reporters after visiting the federal police headquarters in Bukit Aman last week.

Naik's speeches are beamed on Peace TV across the sub-continent, even in China, to around 100 million people. He is said to be wildly popular in Bangladesh. Naik fled India in 2016 and a formal charge sheet was filed against the famed television preacher in 2017 by the country's anti-terror investigation body, the National Investigation Agency (NIA).