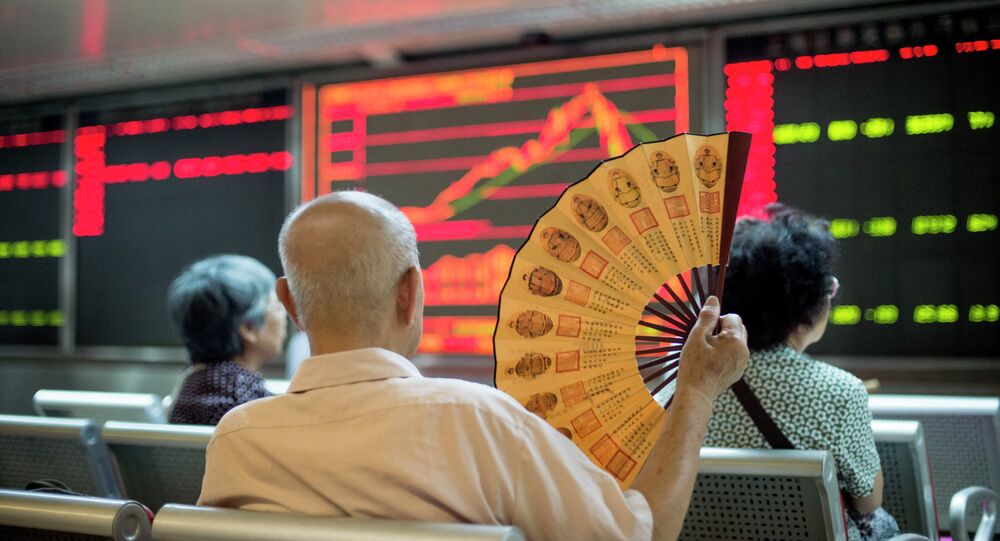 How China Can Manage Its Global Risks

The world economy and international system are now characterized not only by deep interconnectedness, but also by intensifying geopolitical rivalries.

For China, the situation has been complicated further by US President Donald Trump's evident view of the country as a strategic competitor, rather than a strategic partner, not to mention massive domestic social change and rapid technological disruption. The only way to mitigate the risks that China faces is with a tough, continuous and comprehensive reform strategy.

A key risk is financial. At least four "mismatches" lay at the root of past global financial crises, and three of them plague China today. First, with its bank-dominated financial system, China (along with Europe and many emerging economies) suffers from a maturity mismatch, owing to short-term borrowing and long-term lending.

© AP Photo / Ted S. Warren
'Many in the US Feel Deep Angst About China's Economy' - Professor
Yet, unlike many emerging economies, China does not struggle with a currency mismatch thanks to its large foreign exchange reserves and persistent current-account surpluses, which make it a net lender to the rest of the world.

But China has not avoided the third mismatch, between debt and equity: The credit-to-GDP ratio doubled over the last decade highlighting China's underdeveloped long-term capital and equity markets.

Nor can policymakers afford to ignore the fourth mismatch－between ultra-low nominal interest rates and the relatively higher risk-adjusted return on equity (ROE) for investors－which has contributed to speculative investment and widening wealth and income inequality.

These structural risks are largely a result of China's transformation from an agriculture-led economy to one driven by manufacturing exports. As technology continues to progress, with robotization becoming more accessible, companies that once relied on cheap labor and manufacturing exports increasingly need to produce goods and services closer to domestic consumers in open and globally competitive markets.

In this context, China's only option is to abandon its low-cost manufacturing export model and move up the global supply chain. To that end, the government has already introduced industrial strategies－Made in China 2025 and Internet Plus－to support technological development, adoption and innovation. The United States, however, has taken these industrial policies as evidence of mercantilist state intervention that justifies punitive trade tariffs and other sanctions.

© REUTERS / Kim Kyung-Hoon
China's Central Bank Weighing More Stimulus to Support Economy
Complicating matters further for China, the rush to create an open, market-oriented economy has fueled corruption and rent seeking. And, as recent European post-crisis experience has shown, it is politically very difficult to carry out structural reforms when vested interests have captured the regulatory system. That is why President Xi Jinping has engaged in a comprehensive anti-corruption campaign since assuming office in 2012.

Yet China's problems extend beyond structural imbalances to two types of cyclical macroeconomic risks. The first risk stems from the business cycles in advanced, market-based economies, where interest rates, inflation rates and growth rates rise and fall together.

The second type of risk reflects the cycle experienced in underdeveloped, non-market-based economies as they make the transition to a market-oriented economy.

© AP Photo / Ng Han Guan
China’s Pledge to Open Economy Not Indication of Concession in Trade Row with US
In this fast-moving cycle, housing and fixed-asset prices (as well as the currency's value) will increase faster than productivity growth in the tradable sector, owing to supply constraints.

As households and investors borrow cheaply to invest in rapidly appreciating housing and fixed assets, bubbles form and then burst, spurring crises. Yet since the usual response－socialization of bank losses, with a privileged few keeping the profits and bonuses they accrued while the bubble was growing－creates moral hazard, the cycle is likely to be repeated.

Need to Rein in 'Gray Rhinos'

Abandoning the distorted and imbalanced incentive structure, and ensuring that both creditors and debtors share and manage risks, would help break the cycle. China could create a system in which broad equity stakes－held by pension, social security or sovereign wealth funds－are professionally managed, thereby guaranteeing not only that the long-term risk-adjusted ROE is higher than the real (inflation-adjusted) GDP growth rate and the nominal interest rate, but also that the gains are shared widely among the population.

A widely shared positive real ROE would mean less financial repression and a fairer income and wealth distribution. And with more skin in the game, venture capital would be more accountable to investors and savers.

© CC BY 2.0 / Matthew Paul Argall / Shipping container - China Shipping
Structural Changes in China's Economy May Affect Russia, Whole World - EY
In addition to structural and cyclical risks, China must address the "gray rhinos" (highly likely, but often ignored) strategic risks arising from the intensifying Sino-American geopolitical rivalry. Here, the emerging trade war is just the tip of the iceberg. The US and China are set to become immersed in a long-term competition for technological and strategic supremacy. To stay ahead, they will use every kind of leverage and instrument at their disposal.

If this competition is left unchecked, it will surely have far-reaching spillover effects.

Risks are normally mitigated through avoidance, hedging, insurance and diversification. But the Chinese and US economies are both too big and too interconnected to fail, making avoidance and hedging far too dangerous and costly. Insurance would also be impossible, owing to the lack of markets.

The fact that trade negotiations are being pursued in tandem with talks over the Democratic People's Republic of Korea's nuclear program suggests that China and the US understand that, in today's interconnected global system, cooperation is necessary for managing multiple global risks. But if China is truly to build a balanced, resilient, and robust real economy and financial system, it will need to go further, developing a comprehensive set of risk-sharing mechanisms. It is a task that can no longer be ignored or postponed.

'Many in the US Feel Deep Angst About China's Economy' - Professor