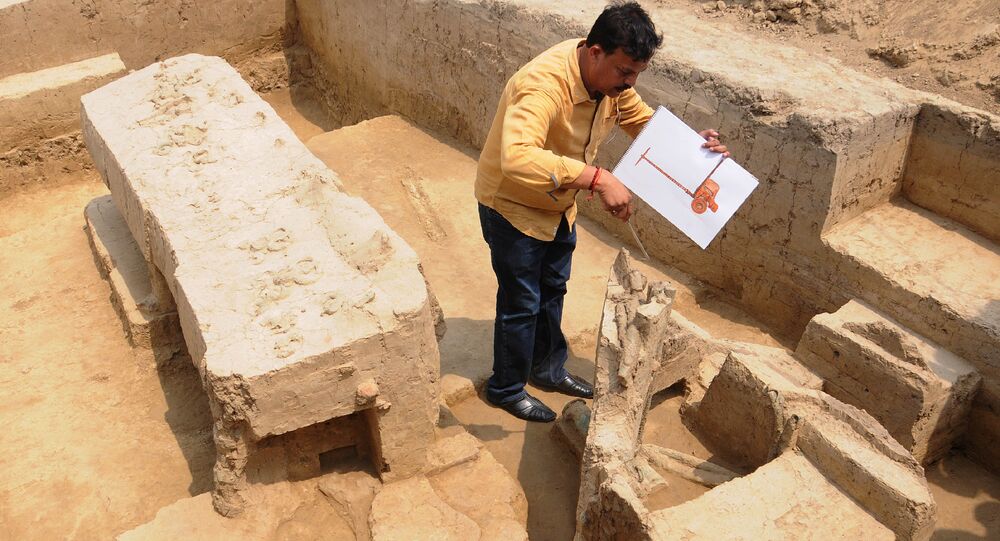 The three decorated chariots found in burial pits indicate the possibility of royal burials while other findings, including those of weapons, confirm the population of a warrior class in the area.

New Delhi (Sputnik): In a ground-breaking finding which could help trace the history of civilizational warfare in India, the Archeological Survey of India (ASI) has found remains of a chariot and weapons dating back to the Bronze Age (2000-1800 BC).

The three chariots excavated by ASI at Sinauli village of Baghpat district in the northern state of Uttar Pradesh is decorated with copper motifs.

Authorities say the findings have opened up further research opportunities into the civilization and culture that existed in the area around 4000 years ago.

Archaeological Survey of India (ASI) has unearthed the remains of a chariot and other antique items that dates back to 'Bronze Age' (2000-1800 BC), in #Baghpat's Sinauli village. pic.twitter.com/8zoW7TUCZV

The ASI expert team, which has been working on the site for the last three months, has informed the Indian press that they are expecting more such discoveries.

© AFP 2020 / Stefan Sauer / dpa
Beginners' Luck: Amateurs Dig Up Viking King's 1,000-Year-Old Jewelry
The excavation began in March this year. Additional to the finding of the chariot, the team has also found swords and daggers at the site, confirming the existence of a warrior population during the Bronze Age in India.

The team has also unearthed eight burial sites and several artefacts, including three coffins, antenna swords, daggers, combs, and ornaments, among others from the site.

"The discovery of a chariot puts us at par with other ancient civilizations, like Mesopotamia, Greece, etc. where chariots were extensively used. It seems a warrior class thrived in this region in the past," said SK Manjul, co-director of excavations, ASI Institute of Archaeology, Delhi.

For the first time in the entire sub-continent, a coffin of this kind has been found. The cover is highly decorated with eight anthropomorphic figures. The sides of the coffins are also decorated with floral motifs. While coffins have been discovered during past excavations in Harappa, Mohenjo-Daro and Dholavira (Gujarat), they have never been found with copper decorations, he added.