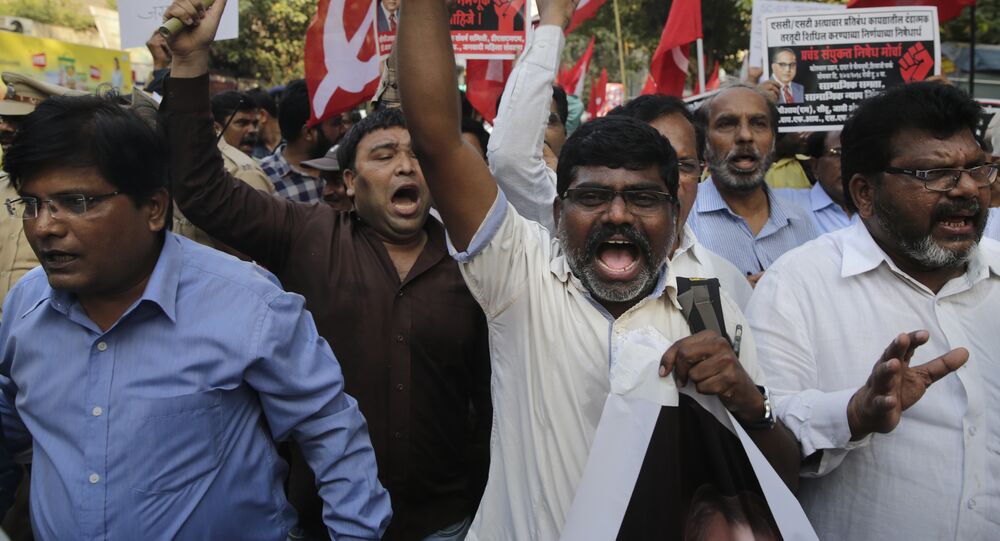 Three Dalit men were brutally hacked to death with machetes and other weapons by a group of upper caste Hindus in India’s southern Tamil Nadu state Monday night. The men were attacked for sitting with their legs crossed, which the caste Hindus took as a grave insult.

"The trouble started on May 26 when two Dalit youths — Theiventhiran and Prabakaran — sitting with their legs crossed outside Karuppasamy temple. Two caste Hindus who came there objected and abused Dalit youths for sitting crossing their legs in their presence which they claim to be a dishonour," A Kathir, executive director of Evidence, a Madurai-based NGO, noted in his fact-finding report.

After an argument broke out between the Dalits and caste Hindus, the Dalits issued a police complaint for the racial abuse hurled at them, which got the offender, a man only identified as Chandrakumar, thrown in jail. His 19-year-old son, C Suman, then decided to take revenge on the Dalits, organizing a group of around 20 assailants from nearby villages to attack the Dalits in their homes.

The Mumbai Mirror also noted that Chandrakumar and his sons had previously been at loggerheads with the Dalit community about an upcoming temple festival, as well as about the Dalits' repeated refusal to clear the way for them as they rode through the town.

The mob converged on Kachanatham at around 9:15 p.m., disconnecting the electricity before attacking the Dalit village, India Times reported.

Two victims, K Arumugam and A Shanmuganathan, died en route to government hospitals that night while a third, Chandrasekar, died of his wounds Thursday morning in the Government Rajaji Hospital in Madurai. Six others were also injured in the attack, according to the outlet. The men also damaged the Dalits' houses and other properties.

Dalits are part of a group of historically disadvantaged classes in India referred to as Scheduled Castes and Tribes in the Indian Constitution, although they are also called Adi Dravida in Tamil Nadu, and were once referred to as "untouchables." Dalits form around 16 percent of India's population, the India Times reported.

Despite numerous attempts to improve the economic and social standing of Dalits and to abolish discrimination against them, Dalits still face horrific levels of violence, rape and property theft, and the police rarely take their side. Dalits are often only hired for low-paying, menial or demeaning jobs, the UK Independent reported, and when they demand equal rights Hindu nationalists accuse them of being "anti-national."

T Chellakannu, deputy secretary of Tamil Nadu Untouchability Eradication Front, pointed out to DNA India that Kachanatham comprises 30 Dalit families and only five caste Hindu families, and that the Dalits were heavily discriminated against, "facing various forms of untouchability. The Dalits together own 150 acres of agricultural land, but they don't get water for their crops until the caste Hindus releases it to them."

Chellakannu noted that the police dragged their feet, as is common in cases dealing with anti-Dalit violence. "If they had taken timely actions, three people would not have lost their lives," he said.