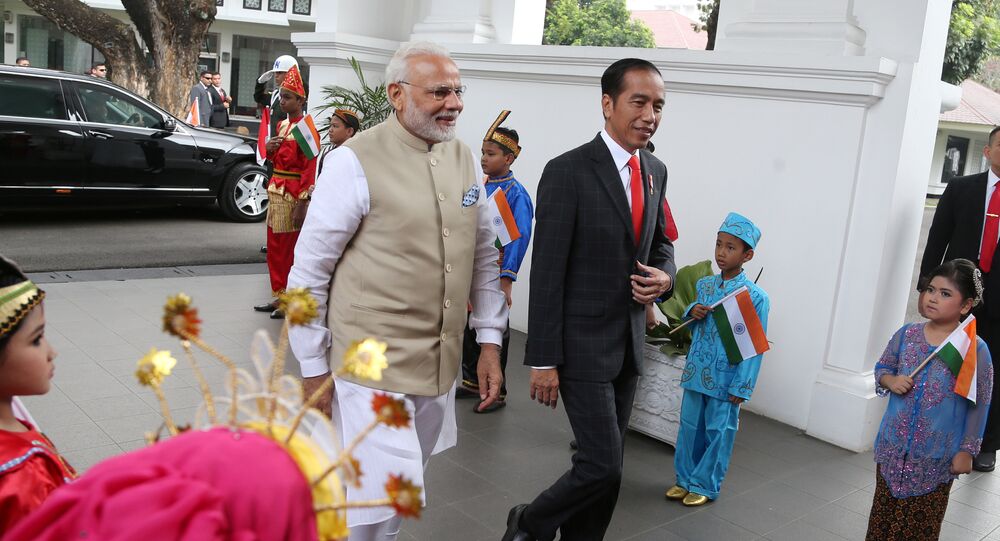 India and Indonesia have signed 15 agreements including for cooperation in the fields of defense, space and health, during Indian Prime Minister Narendra Modi’s maiden visit to Jakarta.

New Delhi (Sputnik) – India and Indonesia have agreed to boost bilateral trade to $50 billion by 2025, Prime Minister Narendra Modi said on Wednesday after his bilateral talks with Indonesian President Joko Widodo in Jakarta.

In a joint press statement after the talks, Prime Minister Modi said that India and Indonesia had agreed to upgrade their ties to a comprehensive strategic partnership.

​"Both leaders agreed to strengthen cooperation in all areas by establishing a new Comprehensive Strategic Partnership to take Indonesia and India's bilateral relationship into a new era," a joint statement issued after the meeting read.

© AP Photo / Syahrul Rizal
Indonesia Gives India Military Access to Strategic Island of Sabang
The two sides also agreed to work intensively for an early conclusion of the Regional Comprehensive Economic Partnership and reiterated that it needs to be comprehensive, fair and balanced with benefits to all member states.

A Defense Cooperation Agreement was also signed to boost defense ties, which include regular bilateral dialogue and consultations on strategic defense and military matters of common interest, the exchange of strategic information, military training and exercises.

Indonesia, the world's largest archipelagic state, and India, which forms the world's second-largest peninsula, commit to a "free and open Indo-Pacific” — a concept authored by Japan's Shinzo Abe that is now being actively pushed by the Trump administration. https://t.co/uY7q2UzP3M

​"The leaders reaffirmed their commitment in the field of defense, with the signing of the Defense Cooperation Agreement between the two countries. The agreement will further strengthen and renew the existing cooperation for the mutual benefit of the two countries and the region," the joint statement read.

India and Indonesia also agreed to strengthen their existing naval cooperation including a bilateral coordinated patrol initiated in 2002 between the navies of the two countries, and the commencement of bilateral naval exercises.