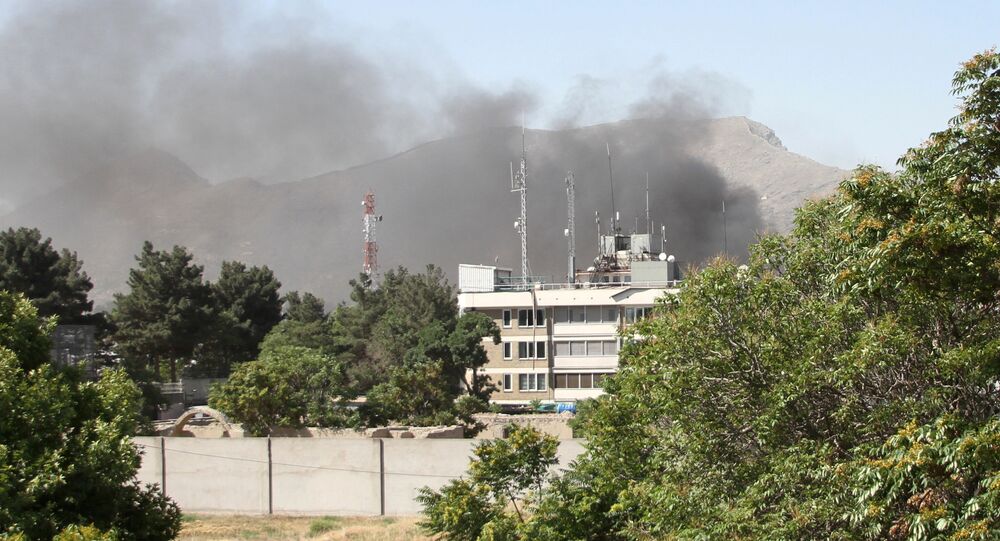 The purported attack on the Afghan Interior Ministry building is the latest in a series of deadly attacks in Kabul this year.

A blast hit the building of the Afghan Interior Ministry in Kabul, 1TVNews reported on Wednesday citing a security source, adding that the blast was followed by gunfire.

The explosion was most likely triggered by a suicide attacker, Interior Ministry spokesman Najib Danish said as quoted by the broadcaster, adding that one person was injured in the incident.

Previously, 1TVNews reported a loud blast and gunfire has been heard in the Afghan capital of Kabul near the Interior Ministry.

Police and militants have reportedly been exchanging fire after the explosion had rocked the area.

The law enforcement officers, who have been inside the buildings, reportedly said they believed it was a militant attack on the ministry.

Reports from #Afghanistan's capital Kabul speak of explosions and ongoing gunfire at the new interior ministry compound on airport road; some sources say attackers have entered compound. Yesterday night, a group of heavily armed individuals was arrested in #Kabul's PD9

No further details have been immediately available as the situation has been developing, while it has been unclear whether there were casualties in the reported attack.

Update:
Gunmen attacked Ministry of Interior's headquarter which is located close to #Kabul Airport.
Terrorists initially detonated their explosives at the check points and then managed to enter the compound of the ministry, fire fight still continues: @NajibDanish2#AFG

No group has claimed responsibility for the blast, however, Afghanistan has been in a state of political and social turmoil, with government forces fighting the continuing Taliban* insurgency. Other terrorist groups, such as Daesh*, have also expanded their activities both in the country and neighboring states.

*Daesh, also known as ISIS, the Islamic State, and the Taliban are terrorist groups banned in Russia