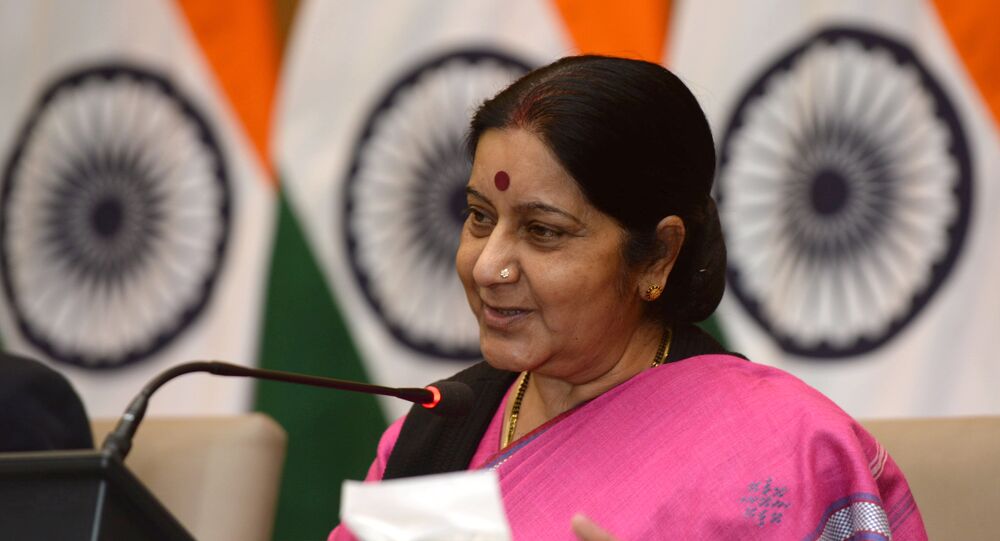 Eliminating doubts over its future course of action on bilateral trade, including that of defense, with Iran, Russia and Latin American countries in the wake of US sanctions, India has said it only abides by sanctions imposed by the United Nations and not those imposed by any specific country.

New Delhi (Sputnik) — India's Minister for External Affairs Sushma Swaraj told reporters during an annual press conference in New Delhi that the country will continue to trade with Iran or Russia in spite of the sanctions announced by the Trump administration.

"India follows only U.N. sanctions and not unilateral sanctions by any country. We had continued our trade relation during the last sanction which was imposed prior to 2015 on Iran," External Affairs Minister Sushma Swaraj said, when asked about India's response to the US sanctions.

The re-imposition of US sanctions on Iran following Trump's withdrawal from the nuclear deal has cast a shadow on the long-standing political and economic ties between India and Iran.

© Sputnik / Alexei Druzhinin
Modi-Putin Meet: India's Got Russia's Back in Latest Standoff With the West
Meanwhile, the Countering America's Adversaries Through Sanctions Act (CAATSA) adopted by the Trump administration has threatened to adversely impact India's defense purchases from Russia, including that of the S-400 air defense system. CAATSA is designed primarily with Russia in mind, and specifically, countries that continue to use Russian military hardware and systems. The law imposes sanctions on individuals and countries that deal with Russia's intelligence and defense sectors.

But, the foreign minister's statement has made it clear that India is in no mood to disturb its relations with its all-weather friends, despite US pressure.

"Our foreign policy is not directed to appease or come under any kind of pressure from any country and also it is not reactionary," Foreign Minister Swaraj emphatically said during the press conference.

© Photo : Russian Helicopters
Indian Team Visits Russian Defense Facilities Amid US Sanctions Threat
Swaraj also emphasized that New Delhi has given importance to Latin American countries, including Venezuela, like never before and will continue to do so in future as well.

"The Reserve Bank of India disallows trading in cryptocurrency, so we will not trade in cryptocurrency. We are figuring out a mechanism through which trade to be continued with Venezuela in oil," Swaraj said, replying to a query on whether India would trade in Rupee or cryptocurrency with Latin American countries facing US sanctions.

The Trump administration has barred US companies or citizens from buying debt or accounts receivable from the Venezuelan government, including Petróleos de Venezuela, the government-owned oil company that is the parent of the Citgo Petroleum Corporation. Venezuela is offering a discount on oil sales made in "petro"- an oil backed cryptocurrency aimed at warding off US sanctions on energy trade. Indian media earlier reported that Venezuela had offered as much as 30 percent discount on oil sales to Indian refiners provided they traded in the "petro."