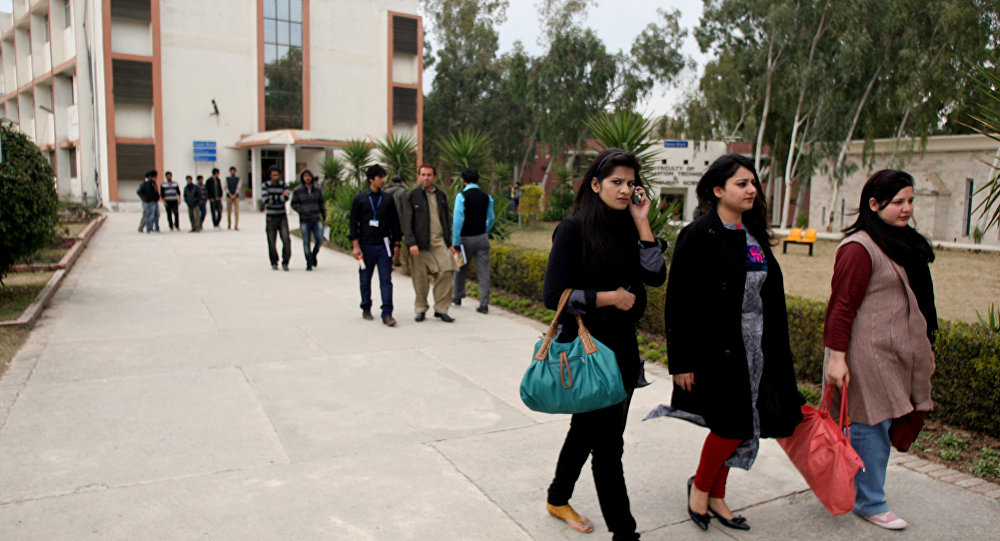 Pakistan’s Bahria University has issued a bizarre dictate which requires male and female students at the university to keep a minimum distance of six inches between themselves or face disciplinary action.

New Delhi (Sputnik) — The Bahria University authorities have justified the move by claiming that touching of unrelated males and females is forbidden in Islam.

"All students are hereby directed to strictly abide by the dress code while in university. Instructions have been issued for disciplinary action against the violators as per the rules. Moreover, male and female students are to maintain a distance of at least six inches while sitting and standing together," a notification issued by the university reads.

Bahria University is based in Islamabad and has campuses in other cities including Karachi and Lahore.

The notification has been widely circulated on social media and has garnered more criticism than appreciation.

​"The students of Bahria University can carry a measuring tape with them to campus so that they can fulfill the orders of their administration to keep a distance of 6 inches from the opposite sex," tweeted Furqan Siddiqui, a Pakistani journalist.

The students (girls & boys) of Bahria university #Karachi can carry a measuring tape with them to campus so that they can fulfil the orders of their administration to keep a distance of 6 inches from the opposite sex pic.twitter.com/eN5vIEw3dA

​"Shama Junejo posted "insanity overloaded", reacting to the university diktat. She also asked, "what about standing together in university buses."

Insanity overloaded…
Now take inchtap to the university in the month of #Ramazan to have six inches of distance.
Because Bahria University has issued orders that girls must keep distance of 6 inches when sit with boys.
What about standing together in university buses? pic.twitter.com/MTWk1W0oos

The Federation of All Pakistan Universities Academic Staff Association has demanded an immediate withdrawal of the circular describing it as "ridiculous."