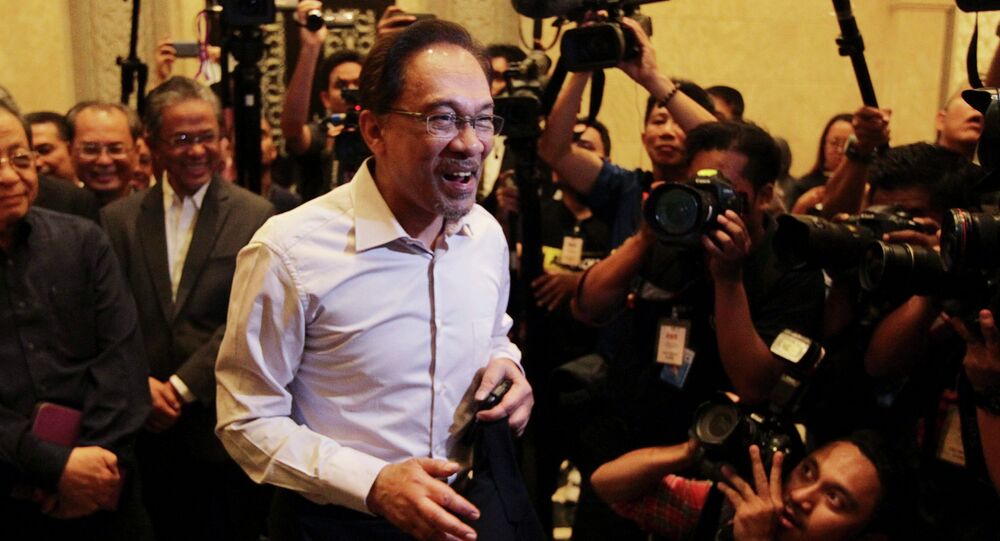 Malaysian political leader Anwar Ibrahim, who has been pardoned and freed from prison, has talked of reforming the country's affirmative action quota system which discriminates against ethnic Chinese and other minorities. Ibrahim is set to return to parliament later this year after a tumultuous week in Malaysian politics.

Mohamad, who was Prime Minister from 1981 until 2003 and oversaw Malaysia's phenomenal economical growth, has made a miraculous political comeback at the age of 92.

Anwar Ibrahim had been his deputy but when he challenged Mahathir and sought to take over in the mid 1990s he ended up charged with sodomy and eventually jailed in 2004.

Anwar Ibrahim is finally out, ladies and gentlemen. pic.twitter.com/FI9ThCe898

Anwar, now 70, has always denied the charge and claimed the charges were politically motivated.

His sentence expired on June 8 but on Wednesday, May 16, he was given a royal pardon and was freed from custody by his old rival, Mahathir, who has promised to hand over power to Anwar in two years' time.

In an interview with the AP news agency he praised Mahathir as an "indefatigable fighter."

"He chose a good ending to this episode. I don't want to deny that we had serious disagreement on policies and excesses but now he said, 'Look, I owe it to this nation that I loved and I want to make amends and the corrective measures,'" said Anwar, who has also promised to shake up Malaysia's political system.

Mahathir Mohamad and Anwar Ibrahim have been at the center of Malaysian politics since 1982. That's 36 years. THIRTY SIX YEARS.

In 1971, after riots by the majority Malays against the ethnic Chinese minority, Malaysia introduced the New Economic Policy (NEP) which gave a quota of government jobs, contracts, education and housing to Malays.

It helped to lift millions of Malays out of poverty and created an urban Malay middle class.

But many ethnic Chinese and Indian people in Malaysia have claimed it is discrimination and it allows for mediocre and lazy Malays to get jobs and contracts which could be done better and more efficiently by competitors from other ethnicities.

It is a sensitive issue with many Malays fearing the economic dominance which the ethnic Chinese in particular used to have before 1971.

Datuk Seri Anwar Ibrahim is back after 3 years, 3 months, and 6 days! 1,191 days since he was sentenced to jail back in February 2015. pic.twitter.com/bbe4UZOmo9

But Anwar said on Thursday, May 17, the NEP should be discarded and replaced with a new system which helped the poorest in society, whatever their race.

"I have said that the NEP should be dismantled but the affirmative action must be more effective. I believe that poor underprivileged Malays will benefit more through a transparent, effective affirmative action policy rather than the New Economic Policy which has been hijacked to enrich the few cronies," said Anwar, who is himself a Malay, as is Mahathir and Razak.

Anwar also promised to put on trial Razak who he said had failed to understand the level of public anger about a corruption scandal which involved the 1MDB state fund.

Police carried out searches of Razak's home on Wednesday night and Anwar predicted Najib would end up in the same prison he had just left.

"He will certainly be charged. It will be very difficult for him to escape prison," said Anwar.

Now that Najib and Rosmah are out of the government, I feel I’m able to talk about what transpired between me and Abdul Razak Baginda at his UNMC lecture. I blocked ICON and his assistant after the session because I was in fear. He tried to intimidate me and was verbally abusive.

"He was full of himself, thinking he could succeed and even toying with the idea that he will regain a two-third majority which is clearly outrageous to most people but he is convinced. He is just oblivious to the stark realities, he is in a cocoon," said Anwar.

Razak and his wife were prevented from leaving the country on Saturday, May 12, on a "vacation".

Anwar has waited a long time for this moment. His original conviction was quashed but then reinstated and he was sent back to jail in 2015.

Asked Dr Mahathir why he wanted to take on the Education Ministry portfolio. "Because many people in Malaysia seem to be uneducated," he joked.

"It's a long wait… the struggle is 20 years. There was continued humiliation, victimization but it's OK, we survived. There's no need to complain too much. We should focus our attention now on how to alleviate the poor, how to reduce this inequality, how to stop these excesses and endemic corruption which is part of the culture now," he said in an interview with AP on Thursday, May 17.

Anwar is expected to return to parliament later this year after a specially arranged by-election and seems confident Mahathir will stick to his word and hand over power.

On Thursday Mahathir made himself Education Minister in the new government.

"Malaysia can be a beacon for democracy and justice in the region and more so in the Muslim world," he said.