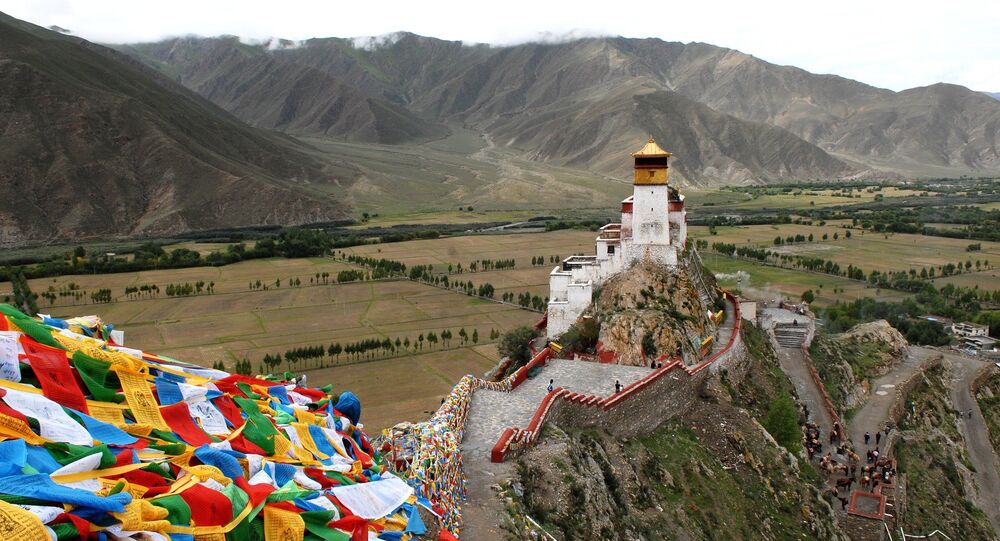 The decision to ban them may hinder the repatriation of Tibetan exiles currently living in India, altering the recent phenomenon of China increasingly accommodating returning Tibetan monks.

New Delhi (Sputnik) — In what could be termed as a major setback to Tibetan monks trained in India, China has banned them from teaching in monasteries.

Global Times reported on Tuesday that Indian-trained monks have been banned from teaching Buddhism to residents of Litang county in Southwest China's Sichuan Province.

"As some monks received education overseas from the 14th Dalai Lama clique — whom China regards as separatist — it is necessary to tighten supervision so as to avoid the clique using local Buddhists to conduct separatist activities," Zhu Weiqun, an influential former head of the Ethnic and Religious Affairs Committee of the Chinese People's Political Consultative Conference, told Global Times.

© AP Photo / Tsering Topgyal
Dalai Lama Explained Russia's Role in the World During Meeting With Scientists
Litang county, which borders Tibet, conducts patriotic education classes every year for monks who had been educated in India. This practice is considered a means to monitor the conduct of the monks and whether they exhibit "any signs of separatist intent." The county is home to prominent Buddhists including the 7th and the 10th Dalai Lama.

Of late, it is widely believed that the Dalai Lama, whom China considers a dangerous secessionist leader engaged in anti-China activities from India's territory to secure Tibetan independence, has made a fresh attempt to return to his homeland.

However, the Dalai Lama, who has been traveling all over India as part of the celebration of his arrival to the country six decades ago, said that Tibet could benefit economically by staying in China, while Chinese citizens could benefit from Tibetan Buddhism.

"Historically and culturally, Tibet has been independent. The region's geography shows where Tibet begins. So long as the constitution of China recognizes our culture and the Tibetan autonomous region's special history, they can remain [part of China]," the Dalai Lama said on April 22 in New Delhi during a lecture to commemorate the 60th anniversary of his exile to India.