"Chinese gala is so amazing; sooner or later, we will make Americans call us daddy," Wang Yifan, a former Chinese student at Pennsylvania State University (PSU) who is taking a gap year to pursue a musical career, blurted out during his freestyle rap performance at a gala for Chinese students at PSU.

Wang's provocative lyrics angered two Chinese-American professors from the same university, who said they felt "insulted" by the young man's speech and complained to Chinese Students and Scholars Association (CSSA) of PSU, the gala organizer, after the show.

Firing back, Wang released a diss track, "Chinese Daddy," on April 22, retorting upon the professors and calling them "traitors" who "butter up to their US daddies." On YouTube, the video has attracted more than 54,000 views together with 4,400 likes and only 900 dislikes as of May 3.

"I got angry after I learned they are ethnic Chinese. Why did they do this and use those bad words to describe me?" Wang said. He told the Global Times that he would never apologize regarding this matter.

Rap has become a popular artistic medium in China in recent years due to the popularity of the country's first hip-hop reality show, The Rap of China, produced in 2017. Local rappers whose lyrics involve unhealthy content, such as drug, violence and sex were banned at the same time.

Meanwhile, patriotic hip-hop groups like Chengdu Revolution (CD Rev) are gaining steam and receiving the endorsement of the Chinese government. The country's regulators hope to transform local hip-hop culture into a positive influence with Chinese characteristics to comply with Chinese socialism.

The slogan of the second season of The Rap of China, for example, was changed to "Rap out your positive energy and sing out your passion."

"Wang's song is full of emotion while real patriotism should be deep passion," Shi said.

After the recent Lantern Festival Gala, Chen Gong, a professor at the Department of Biology of PSU and a former adviser for CSSA, complained about Wang's speech and wrote to Jenny Li, another associate professor at PSU.

"I was shocked when hearing from someone attending the CSSA gala that one rapper said on stage 'make Americans call us daddy.' This is terrible. Some students are senseless and ill-minded!" he wrote.

Chen added that "Many American students understand Chinese very well… and they will certainly feel insulted. So do I."

"I hope CSSA officers discipline the student seriously and install policies to prevent such vicious performance on stage in the future," Chen wrote to CSSA, according to screenshots of his emails leaked on the internet.

Chen did not respond to the Global Times as of press time.

Li, also an adviser for CSSA, responded to Chen in an email that "a few faculties and friends did mention that to me and showed their concern and uncomfortableness."

Li added that she hoped CSSA could prevent such incidents from happening again and really understood "the meaning of freedom of speech."

He stressed that his song targets not only the two professors, but any Chinese people who "dedicate their hearts to America," according to his lyrics.

In his song, Wang referenced "fresh air," an expression used by Yang Shuping, a Chinese overseas graduate of University of Maryland who criticized China's air pollution and hailed America's freedom of speech during her commencement speech in May 2017, which caused uproar on Chinese social media.

In Wang's Sichuanese dialect lyrics, he depicted such people as:

"I am not targeting all Chinese people who live abroad. They have their reasons and it is their choice, but they should remember where their roots are. Since you come from China, you should stick up for Chinese," Wang insisted. 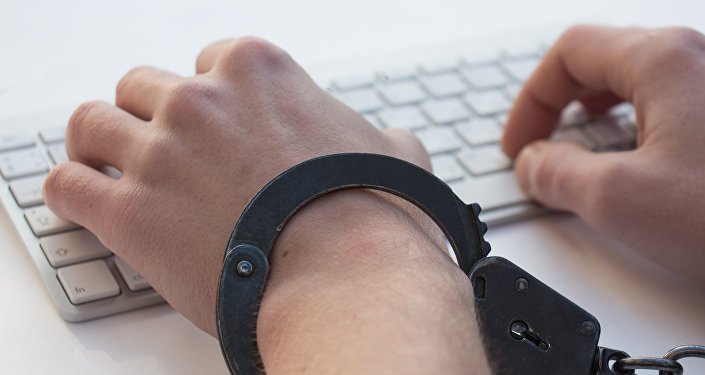 © CC0
Universities to Crack Down on Overseas Chinese Students' Plagiarism

Although having lived in America for six years, Wang never intended to integrate into American society. "My white roommate threw a shoe at me when I first came to America. Even my professor asked me to sit in the front row before an exam because he thought Chinese students may cheat," Wang said.

Even if Chinese students studying abroad face many difficulties, the US still remains a popular country among Chinese families and their children. According to the US-based Institute of International Education, 350,755 Chinese enrolled in American educational institutions between 2016 and 2017, accounting for 32.5 percent of the total number of overseas students in the US.

As for the expression "calling us daddy," Wang said this is a social media catch phrase. "[Calling daddy] is a recognized expression in China's cyberspace. For example, we often say Ma Yun Daddy (Alibaba's founder and CEO), Ma Huateng Daddy (CEO of Tencent Holdings) or Wang Jianlin Daddy (chairman of Dalian Wanda Group). It's just a funny expression," Wang said.

Chinese netizens expressed different opinions regarding the "daddy incident" on social media. Some criticized that Wang's song discriminates against Americans, asking "If an American student studies in China and asked Chinese people to call him daddy in a party for American students, what would you say? This is not patriotism, but rubbish."

This was echoed by Shi, the film critic. "The song is disrespectful," he said.

Others, however, supported Wang on YouTube, wishing "he could continue this spirit to dare to air his opinion, keep doing music and speak out for people suffering injustice when he comes back to China."

Wang Zixin (aka "Chuckie"), leader of CD Rev, said he has listened to Wang's "Chinese Daddy" and does not think there's anything wrong with it.

The offensive lyrics of the song blew up on Chinese social media two years ago, and many Chinese called for a boycott of YG.

"If the Americans find Wang's song inappropriate, and if their frail hearts feel broken, I just hope when American rappers insult Chinese in their songs, they can understand why we're furious," the rap group leader said.

However, he added that it wasn't wise for Wang to perform the song on American soil. "This will affect his academic life and personal life," he said.

Wang Yifan explained that the motivation to write this song is out of his personal wish that "one day China can surpass America."

"I can't say my experiences abroad make me love China even more. Being influenced by an external environment, my patriotism is enlightened. After a child is bullied outside, he will come to look for his parents. He will then know who he can count on," Wang said.

At the end of his rap, Wang said he will come back to China and contribute to his homeland:

"At some point in history / other countries have been more advanced than us, It's fine that you left China / but I'm going back home/ Going back home /I will build my country after going back home/ The rapid rise of China made Americans feel frightened."