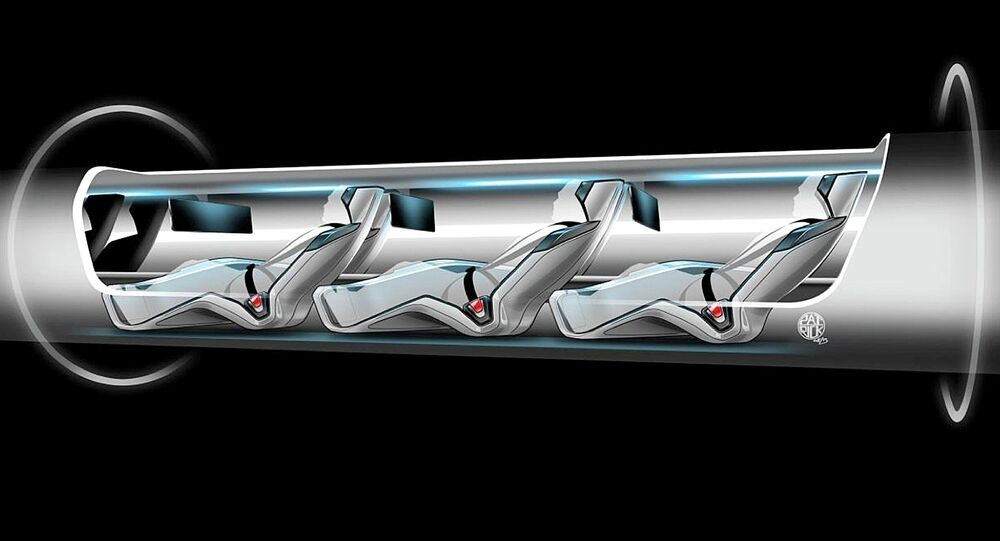 The state government of Andhra Pradesh, which proposes to shift its current capital to the city of Amravati, had last year asked Hyperloop Transportation Technologies (HTT) for a pre-feasibility study for a high-speed transportation system.

New Delhi (Sputnik) — Banking on the Indian government's ambition to decongest the country's road and rail transport, Hyperloop Transportation Technologies (HTT) has come up with a pre-feasibility study, which aims to provide high-speed transportation in a 700-800 kilometer stretch along India's southern city of Andhra Pradesh.

The proposed system will connect the towns of Anantapur-Amaravathi-Vijayawada and Visakhapatnam as part of an integrated public transit system. HTT has also proposed setting up a manufacturing complex where it plans to build the tube, capsule and track and carry out 3D printing of some locomotive parts.

"Given the population of 3.5 million people, the total travel demand for the city is estimated to be around 4 million motorized trips by 2050. To support this requirement, there is a need for a sustainable high-quality robust mass transportation system," Ajay Jain, the principal secretary of the energy infrastructure and investment department, said in a statement.

"We appreciate the pre-feasibility presentation made by Hyperloop Transportation Technologies and look forward to the feasibility study," J Krishna Kishore, the CEO of the Andhra Pradesh Economic Development Board, added.

© AP Photo / John Locher
British Tycoon Richard Branson Promises Operational Hyperloop in India by 2024
In the last year, most of the firms engaged in hyperloop technology had entered into discussions with the Indian government to assess the feasibility of the technology, first mentioned by Elon Musk, CEO of Tesla and SpaceX, over five years ago.

On February this year, Richard Branson-backed Virgin Hyperloop One had signed a framework agreement with the Maharashtra government to connect Mumbai and Pune. This deal aims for a commercial hyperloop line operational by 2025. The company hopes to complete the feasibility study by September this year.

For the last five years, the revolutionary transportation system has constantly been discussed, but with little action. However, last month, Hyperloop Transportation Technologies (HTT) announced that it had begun constructing a test loop in France.

Hyperloop CEO to Sputnik: 'We Are Getting Closer to Russia'