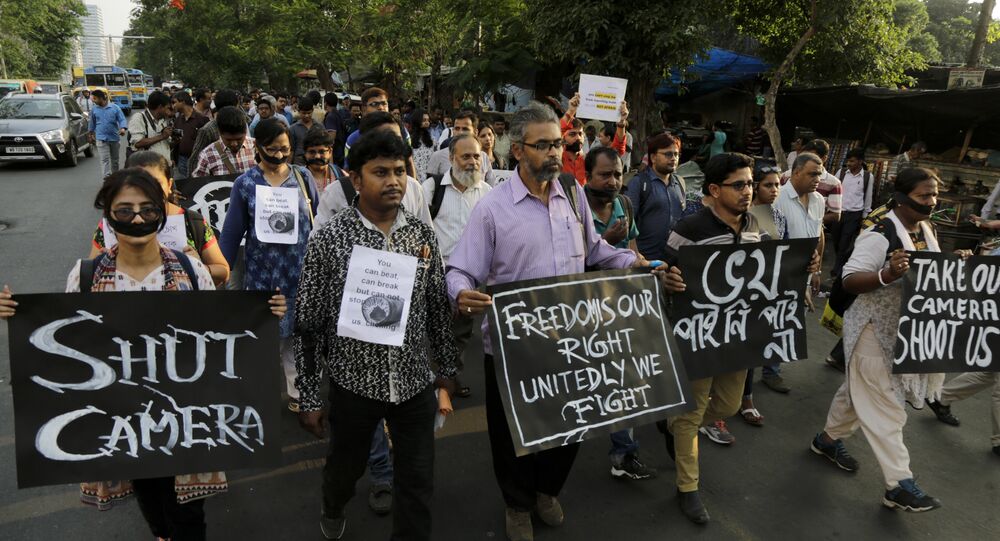 The Hoot, India's first media watchdog, had documented 46 attacks on journalists in India in 2017. Between January and April 2018, there have already been 13 all across the country, three of them in West Bengal alone, according to its latest report released on the occasion of World Press Freedom Day.

New Delhi (Sputnik) — A report released by The Hoot for the period between January and April 2018 projects a bleak future for press freedom in the world's largest democracy.

"The first quarter of 2018 has seen three killings and 13 attacks on journalists' defamation cases that came to trial, a sedition case against a journalist and a clear push by both state and central government and the judiciary, through regulatory policy as well as judicial orders, to curb free speech. There were also around 50 instances of censorship, and more than 20 instances of suspension of Internet services, as well as the takedown of online content," the report released by The Hoot said on the occasion of Press Freedom Day 2018.

© AP Photo / Khalil Senosi
UN Chief Expresses Concern Over Killing of Journalists in India
The Hoot investigation of the state of media freedom from January 1 to April 30, 2018, reveals that a range of actors, from politicians, businesspersons, members of right-wing Hindu organizations, the police and paramilitary forces, government agencies like the film certification board, the Union Information and Broadcasting Ministry, different state governments, lawyers and even media organizations, have acted to undermine freedom of expression, it added.

A senior journalist says India's image of a "vibrant democracy" may take a hit if the government does not give up on undue efforts to regulate and further strangulate the freedom of the press in this south Asian nation.

"Press Freedom exists in India to a considerable amount and we take pride that the country has a robust and growing journalistic tradition. But the recent attempts of the government to regulate the press is of utmost concern," M. K. Venu, senior journalist and founding editor of The Wire news portal told Sputnik.

Venu along with more than 100 senior journalists and writers in India recently wrote a letter to Indian Information and Broadcasting Minister Smriti Irani to desist from bringing about regulations to curb press freedom. The journalists' concern was triggered by the government's plan to regulate online news content.