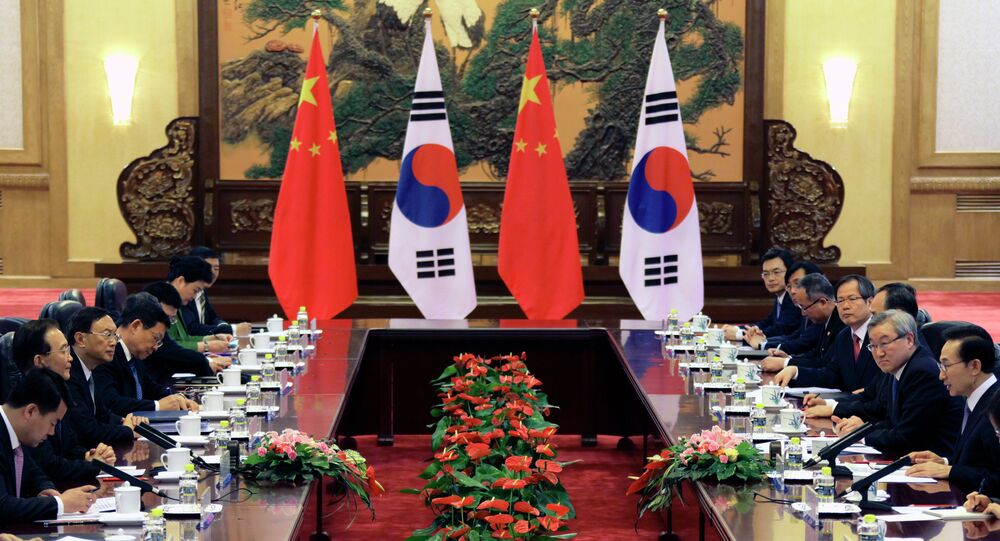 BEIJING (Sputnik) - Beijing hopes that the upcoming trilateral summit with the participation of Chinese, Japanese and South Korean leaders will contribute to regional peace and will mark a new era in trilateral cooperation, Chinese Foreign Ministry's spokeswoman Hua Chunying said.

"We hope that the forthcoming meeting will open a new page in the cooperation of the three states and will make a new contribution to maintaining regional peace, prosperity and development," Chinese Foreign Ministry's spokeswoman Hua Chunying said at a briefing.

She also expressed her hope that Li's visit to Japan, which will become the first one in eight years, would facilitate the further improvement of relations between China and Japan.

© REUTERS / Kevin Lamarque
Japan, US See Inter-Korean Summit as Step Toward Peace in North-East Asia - Abe
Relations between Japan and China have been tense due to a territorial dispute over the Senkaku Islands in the East China Sea. China says that the islands have been part of its territory since ancient times, while Japan argues the islands have been in its control since 1895.

The seventh trilateral summit is set to be held in Tokyo on May 9. Premier of the Chinese State Council Li Keqiang, Japanese Prime Minister Shinzo Abe and South Korean President Moon Jae-in will take part in the summit. During the event, the parties are expected to discuss, in particular, the outcome of the recent inter-Korean summit and the global situation in general.

US, China and Saudi Arabia Biggest Military Spenders in 2017 - SIPRI