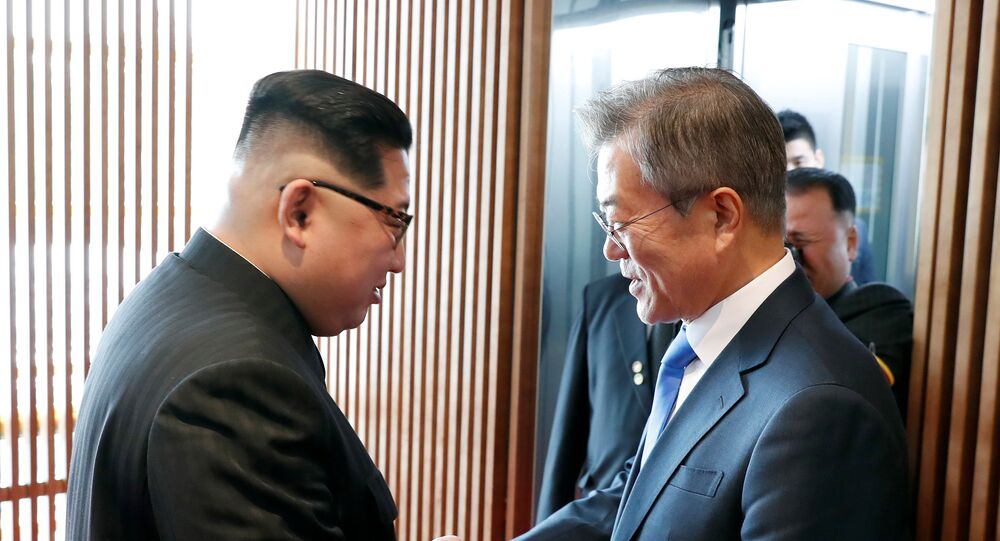 MOSCOW (Sputnik) - North and South Korea signed a declaration on the normalization of relations at the historic summit attended by North Korean leader Kim Jong-un and South Korean President Moon Jae-in, held on Friday in the demilitarized zone separating the two countries.

The one-day summit, which took place in the truce village of Panmunjeom, came after months of rising tensions. Seoul was concerned with Pyongyang's ongoing missile and nuclear tests, while North Korea was wary of its neighbor's military drills with the United States. However, the first sign of detente came in the form of Kim's address on New Year's Day, in which he said that the country's athletes might go to South Korea for the Winter Olympic Games.

The North and South Korean national teams ended up walking together at the opening ceremony of the Games under a so-called unification flag in February. The rapprochement between the two sides has been ongoing ever since.

In 1953, the two countries signed the Korean Armistice Agreement agreement in Panmunjeom, but full-fledged peace has yet to be established.

Moon was the first to arrive in the village where the armistice was signed over half a century ago. Kim arrived shortly afterward, shook hands with his South Korean counterpart and stepped over the Military Demarcation Line (MDL) in the Demilitarized Zone (DMZ), becoming the first North Korean leader to so in decades.

Moon then also crossed over to the other side briefly.

The summit was held in the so-called Peace House.

Kim said the North Korean delegation came to the meeting with a sense of a new beginning and expressed hope for good results. At the same time, Moon said that the sincere dialogue at the summit would be a gift for the entire planet.

Kim stepping over the MDL made the village a symbol of peace rather than separation, according to Moon.

At the end of the break, the leaders planted a commemorative pine tree to symbolize peace and prosperity.

The two leaders signed a joint declaration and hugged each other afterward.

In the declaration, the sides agreed to continue improving relations, and aim for the peaceful reunification and full denuclearization of the peninsula. Seoul and Pyongyang also agreed to hold trilateral talks with the United States and four-way talks with Washington and Beijing.

The declaration also mentioned the humanitarian issues, such as the reunion of separated families, setting August 15 as the date for the meeting of separated relatives.

Reactions Across the World

China, France, Japan, the United Kingdom and several other countries have welcomed the results of the summit.

US President Donald Trump said the meeting was historic, but cautiously added that "only time will tell" what the results would lead to.

The Russian Foreign Ministry welcomed the results of the summit, saying that it was a significant step toward reconciliation.

EU foreign policy chief Federica Mogherini said that the summit showed that the "way to peace" was possible despite everything.

Experts have mirrored Trump's cautious reaction to the results of the summit.

The joint declaration does not list any concrete steps toward denuclearization, Chinese political science expert Cao Xin pointed out.

"The issue of the denuclearization of the Korean Peninsula concerns not only North and South Korea, it should be solved with the United States," the expert pointed out to Sputnik.

According to Cao, China's role in the future peace process has not been outlined yet. Although the declaration mentioned four-way talks with Beijing, "there is no clear understanding of the form of China's participation in the talks."

The expert concluded that the summit was a good beginning, but left many questions unanswered.

The peace agreement should involve China, the United States as well as the two Koreas, Konstantin Asmolov, a leading researcher at the Center of the Korean Studies at the Institute of Far Eastern Studies of the Russian Academy of Sciences, said.

"It would be rational to have a four-way agreement. The Chinese leadership will put the maximum effort into controlling the process, I think," Asmolov told Sputnik.

The expert noted that the prospects for a peace agreement would depend on many factors, including bilateral relations between China and the United States.

The relations between Seoul and Pyongyang might even become tense again, Alexey Fenenko, a researcher with the Institute of the International Security Issues of the Russian Academy of Sciences, suggested.

"As far as I remember, this is the fourth or the fifth time when Seoul and Pyongyang agree on something. The inter-Korean dialogue of 1990 and 1992, when the reunification declaration was signed, all of that was over in a few years," the researcher told Sputnik.

"I cannot rule out that the current detente may lead to new tensions, as the result of the hopes that did not bring any results," the expert said.