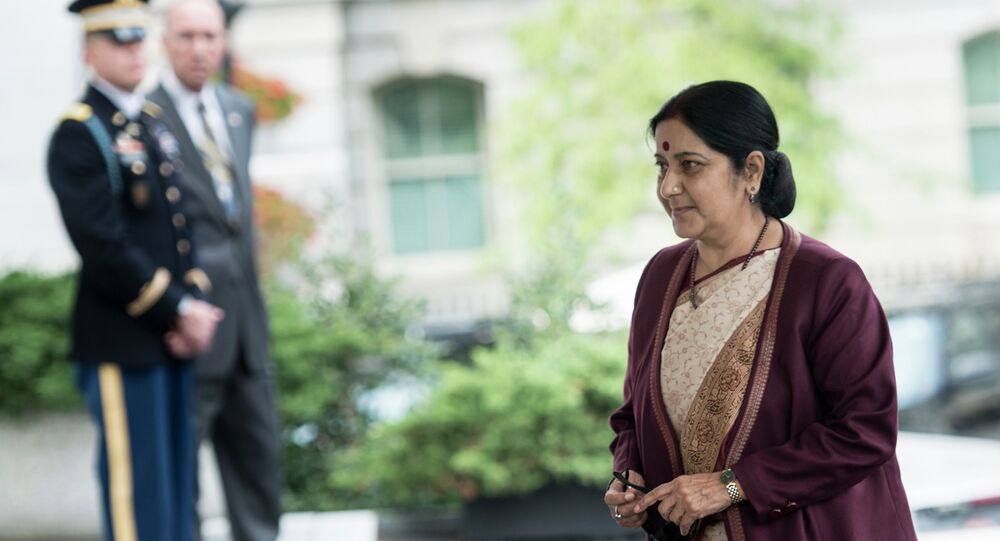 Both India and China are against the protectionist approach adopted by the US last month. While China has retaliated by hardening tariffs against US goods, India is contemplating going to the World Trade Organization (WTO) if it is not exempted from the levy imposed by the US on steel and aluminum imports.

New Delhi (Sputnik) — In an indirect reference to US President Donald Trump's trade policy, India's Minister of External Affairs has categorically rejected protectionism in all forms and reaffirmed its commitment towards a barrier-free trade policy. Speaking at the Shanghai Cooperation Organisation (SCO) foreign ministers meet, Sushma Swaraj, India's foreign minister, asked the eight SCO nations to promote liberalization and facilitation of trade and investment to inject greater impetus into the world economy.

"We believe that economic globalization should be more open, inclusive, equitable, and balanced for mutual benefits. Protectionism in all its forms should be rejected and efforts should be made to discipline measures that constitute barriers to trade," Sushma Swaraj said.

© AFP 2020 / PRAKASH SINGH
China and India to Boost Partnership Amid Washington-Beijing Trade War
Swaraj's comment holds special significance against the backdrop of India preparing for an "informal" meeting between Prime Minister Narendra Modi and Chinese President Xi Jinping in Wuhan later this week. Earlier on Monday, the Chinese Foreign Ministry announced that both leaders will discuss the protectionist policy of the US and the unprecedented changes in the world order over the last 100 years.

"China and India share a wide array of common interests, common concerns, and common propositions. The leaders of the two countries will have an in-depth exchange of views on the overall, long-term, and strategic issues of the Sino-Indian relationship, and they will also discuss the trending issues of today's world. Stronger cooperation between China and India will make the world more peaceful, stable and prosperous," Lu Kang, China's Foreign Ministry spokesperson said during the regular press briefing on Monday.

READ MORE: How China is Forming a United Front to Counter Trump's Protectionism

Kang said that he cannot predict what the leaders will specifically talk about but "I believe that you will get very positive messages (on the issue of protectionism)."

While China has implemented tariffs on $53 billion worth of US goods, including American soybeans, cotton, cars and 100 other products following an American proposal for restrictions on up to $60 billion of Chinese technology imports, India is planning to move the WTO against the US protectionism.