"We expect that the impulse that North Korean leader Kim Jong-un gave in his New Year's speech, which contained proposals on inter-Korean cooperation, will bring about concrete results," Russian Ambassador to North Korea Alexander Matsegora told the Public television broadcaster of Primorye.

Russia also hopes that Seoul and Pyongyang will reach agreements on humanitarian issues and start discussions on economic cooperation despite the existing sanctions against North Korea at the upcoming meeting between Kim and South Korean President Moon Jae-in, the diplomat added.

"We really hope that the two Koreas will manage to agree upon humanitarian issues. In particular, I know that they are going to discuss the issue of separated families," Matsegora noted. 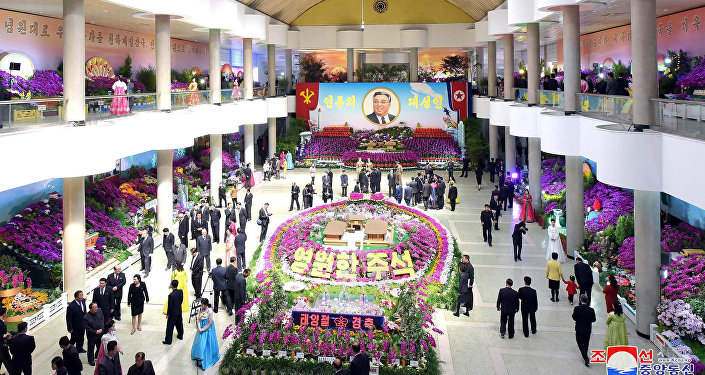 © REUTERS / KCNA
'Day of Sun': N Korea's Celebrations of Founder's Birth Anniversary Lack Their Usual Military Flair (PHOTOS)
Russia is committed to the complete implementation of the UN Security Council resolutions on North Korea, though it will not completely abandon its cooperation with Pyongyang due to their neighborly relations, the ambassador underlined.

"Russia is certainly implementing all the articles of the resolutions that have been adopted on North Korea. These are tough points, they limit our cooperation in the economic field, financial sphere, and seriously complicate our ties in other areas as well. But, nevertheless, we have areas where we keep [cooperating]," Matsegora told the broadcaster.

© CC BY 2.0 / Mario Micklisch / Women of Korea, symbolising the wish for korean reunification
Seoul, Pyongyang May Launch Hotline Between Two Leaders This Week
In his New Year’s speech, Kim expressed his readiness to resume talks with Seoul. On March 5-6, a high-ranking South Korean delegation visited North Korea. Upon the delegation's return, the South Korean presidential office announced that Seoul and Pyongyang had reached a historic agreement on holding the third ever summit between the countries’ leaders.

The North Korean chief has also expressed his willingness to hold talks with the United States. Kim's meeting with US President Donald Trump is slated to take place in May.