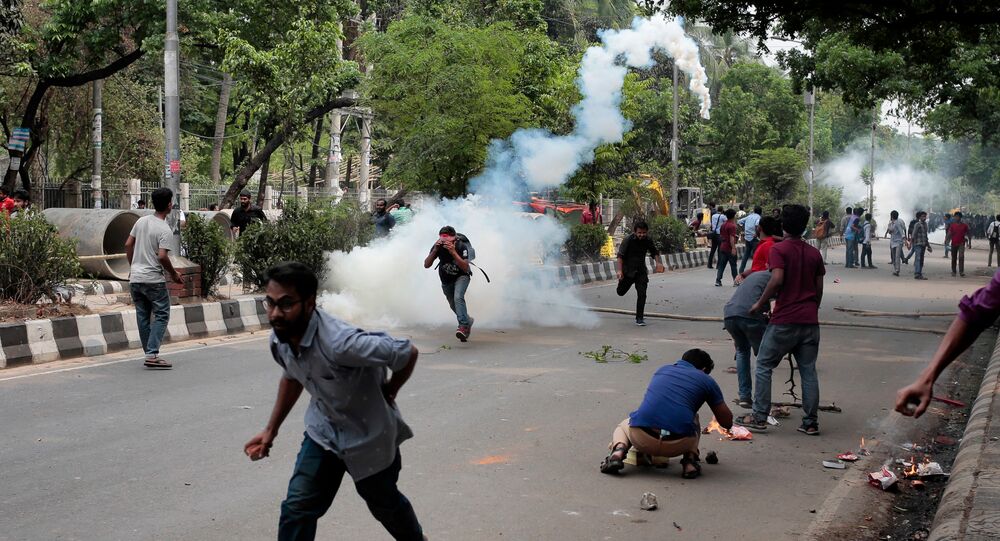 MOSCOW (Sputnik) - At least 80 people were injured in Bangladesh in clashes between the police and students demanding reforms of the existing quota system in public service, local media reported on Monday.

According to United News Bangladesh, confrontations between police and students occurred in Dhaka the night into Monday.

The agency noted that on Sunday evening, police used batons, teargas and rubber bullets to break up the demonstration at the key Shahbagh intersection, after which the protesters ran to the Dhaka University campus. The protesters stormed the residence of the Dhaka University's vice chancellor and caused damage. They also set several vehicles parked on the residence's premises on fire.

Violence erupted in the wake of rumors that a Dhaka University student had been killed by police. According to the news outlet, the periodic clashes lasted until Monday morning, and at least 25 students were detained.

#Bangladesh students launched massive movement in line with the demand of reducing the number of quota-based government jobs, and merit-based recruitment in vacant posts in case of unavailability of eligible candidates for quota-based jobs, and same age limit for all job-seekers. pic.twitter.com/T3DwQDZ3Kl

​The image of the movement of general students of Bangladesh to remove quota discrimination. #ReformQuotaSystem pic.twitter.com/knVhKdvM7T