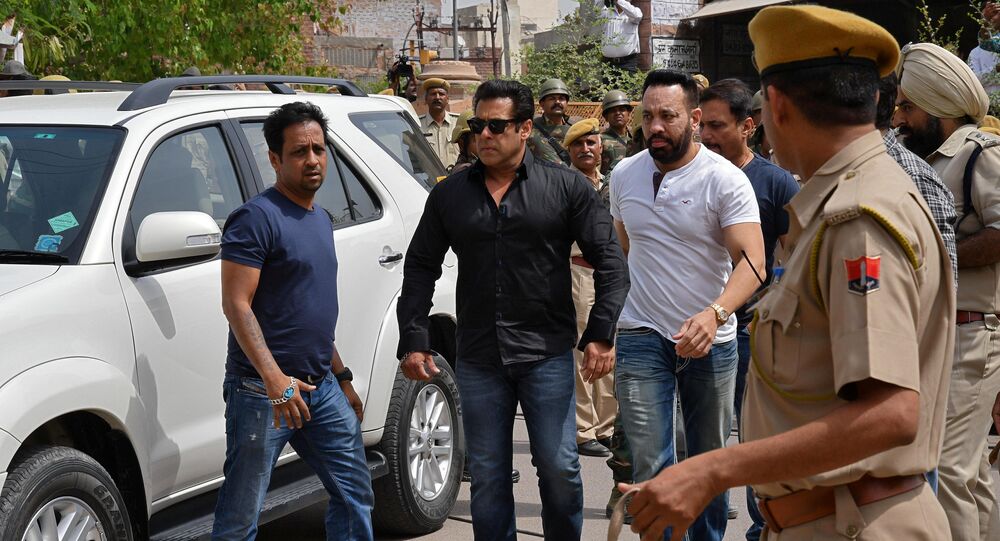 Indian actor Salman Khan was arrested by the police after a local court in India’s western state of Rajasthan sentenced him to jail for killing a rare protected antelope species during his visit to the place while shooting a film in 1998.

New Delhi (Sputnik): Salman Khan, one of India's biggest film stars, has been sentenced to five years in jail for his involvement in the two-decade-old black buck poaching case. The Jodhpur court also slapped him with a fine of INR 10,000 ($154).

Khan has been charged under Section 51 of the Wildlife (Protection) Act. The Jodhpur court, meanwhile, has given the benefit of doubt against four other film stars — Saif Ali Khan, Tabu, Neelam, Sonali Bendre — all of whom were shooting for a film along with Salman Khan in Jodhpur when the poaching incident happened. Khan has long maintained that he was framed by forest officials in the case, while public prosecutors argued that Salman Khan, now 52, and the four others accused, had fled from the spot without taking along the dead animals when the locals spotted them.

Chief Judicial Magistrate Dev Kumar Khatri, who heard the blackbuck case, reportedly termed the actor a "habitual offender" while delivering the verdict. Salman Khan, one of the world's highest-paid actors, has been indicted in many criminal cases till date. This was the last case where the local Bishnoi community who considers blackbucks a reincarnation of their 600-year-old guru — alleged that Khan along with four others had illegally killed two blackbucks from his car window while filming in Jodhpur in 1998.

In 2016, Khan was acquitted by another court of Rajasthan in a separate case related to the poaching of gazelles.  Salman Khan is also facing a hit and run case wherein he was accused of killing a homeless man in 2002 when he allegedly drove his car on the pavement in Mumbai in a drunken state.