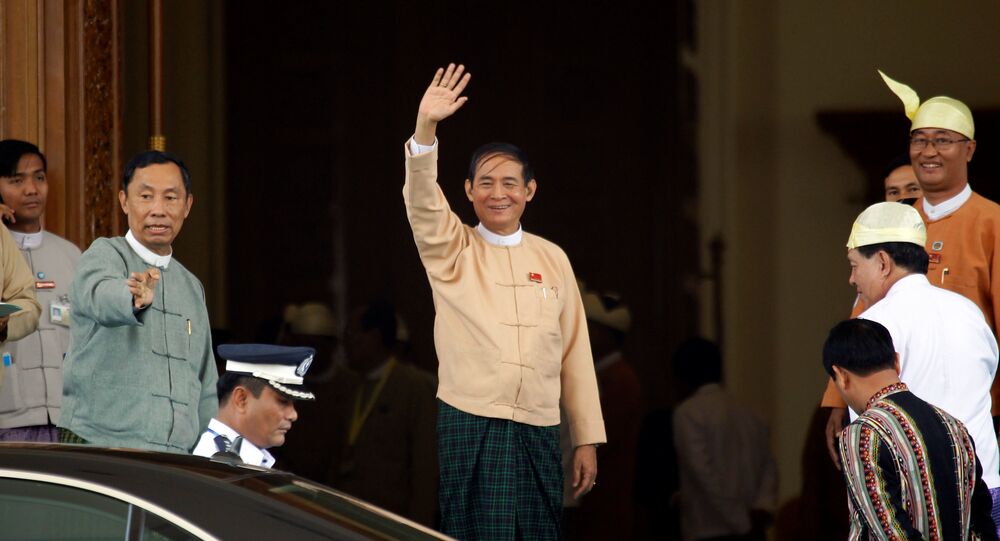 MOSCOW (Sputnik) - Myanmar's Parliament elected on Wednesday Win Myint, a nominee of the ruling National League for Democracy party and the former speaker of the lower house, as the country's new president, following the resignation of Htin Kyaw last week.

Win Myint was born in the city of Danubyu in south-western Myanmar on November 8, 1951.

He graduated from the Rangoon Arts and Science University, where he obtained a bachelor's degree in geology.

In the 1980s, Win Myint studied law, after which he started to work as a lawyer at the Supreme Court of Myanmar in 1985.

In 1988, he became a member of the National League for Democracy. The same year he was arrested for participation in the so-called 8888 Uprising nationwide demonstration, which received its name from the date of the event, August 8, 1988.

© REUTERS / Stringer
Multiple Bomb Explosions Injure 2 People in Myanmar's Rakhine State - Reports
Win Myint was released ahead of Myanmar's general election in 1990. Following his liberation, he run successfully for Ayeyarwady Region’s Danubyu Township, however, the vote's results were then invalidated by the military junta, which ruled the country from 1962 to 2011.

In 2010, Win Myint became a member of the National League for Democracy's central executive committee.

In 2012, he was elected as a member of Myanmar's parliament, with his re-election having taken place in 2015.

On March 21, 2018 he resigned as speaker in order to run in the presidential election.

#Myanmar Lower House Parliament MPs put forth name of former speaker, Win Myint, as a nominee in the running to become next President. #President Htin Kyaw resigned on March 21 saying he wants to take a rest from his duties pic.twitter.com/khRZgANYYh

​On March 28, Win Myint was elected as Myanmar's new president with 403 votes in favor from 636 lawmakers.

#Myanmar #Parliament speaker officially announced that Win Myint is the winner of 3 candidates and is the new #President pic.twitter.com/qKpCcdydzr