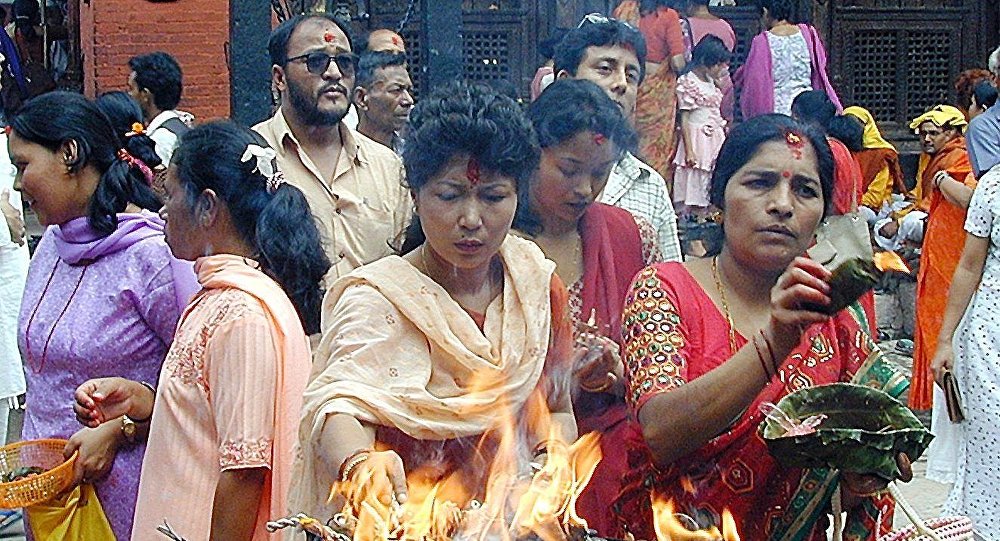 It is not unusual for Hindus in India to conduct rituals involving offerings to the holy fire (Mahayagya) in order to please the Gods. However, what is bizarre in this Mahayagya is that a pollutant (smoke) is being released into the air to rid the air of pollutants.

New Delhi (Sputnik): A prominent Hindu fringe group in India is conducting a holy ritual offering of 50 tons of mango wood to the consecrated fire for nine-days in a row — all this aimed at "curbing pollution" in the country. Around 350 Hindu priests are performing the ritual that started on Sunday at the Bhainsali ground in Meerut city of the northern state of Uttar Pradesh.

A civil rights activist, who is not in favor of promoting unscientific behavior among citizens, says the Uttar Pradesh authorities are not taking action because the organization conducting the ritual enjoys political patronage.

"The constitution of India clearly lays down that the elected government should promote the scientific temper in the society and any activity or opinion that tries to establish unscientific practices must be discouraged. In this case, the government is acting against the constitution of India. Not just this, a lawmaker of the Modi government is a leader where another such Yagya is happening in Delhi, which is supposedly for the defense requirements of the country. This is just ridiculous but real," Arvind Murti, a civil rights activist who hails from Uttar Pradesh, told Sputnik.

© Photo : Pixabay
Terror Fears Miss the Point: Pollution is World’s Leading Killer - Report
The event is reportedly being organized by members of Shri Ayutchandi Mahayagya Samiti, which has constructed 108 fire pits at the 125 square foot area for priests to perform the "Mahayagya" the Times of India (TOI) reported. Mahayagya is a traditional Hindu practice in India which involves offerings of various kinds made to a holy fire.

"Mango wood burnt after pouring pure ghee (cooking oil derived from cow's milk) does not cause pollution. We are also adding sesame seeds, rice and barley to aid the purification process. According to a scientific report, the Ozone layer above our country is the least damaged because of frequent yagyas (offerings to the fire)," Gyanendra Agarwal, president of the organization conducting the ritual told the TOI.
The Uttar Pradesh Pollution Control Board (UPPCB) — the nodal agency responsible for checking acts of violation of pollution norms in the state — has reportedly refused to intervene.

"Burning such large quantities of wood will definitely cause pollution. But there is no policy under which a probe can be issued in this matter, so there is little that we can do. It will also be inappropriate for me to comment on the event," R. K. Tyagi, a regional officer of the UPPCB was quoted by the TOI as saying.
During a Mahayagya — priests of all ages wearing saffron robes belonging to the upper-caste Brahmin community sit around the fire pit and chant Hindu hymns and prayers while offering firewood and other ingredients to the consecrated fire. Such rituals are often performed to please the gods in an attempt to avert ill-fate and calamity.