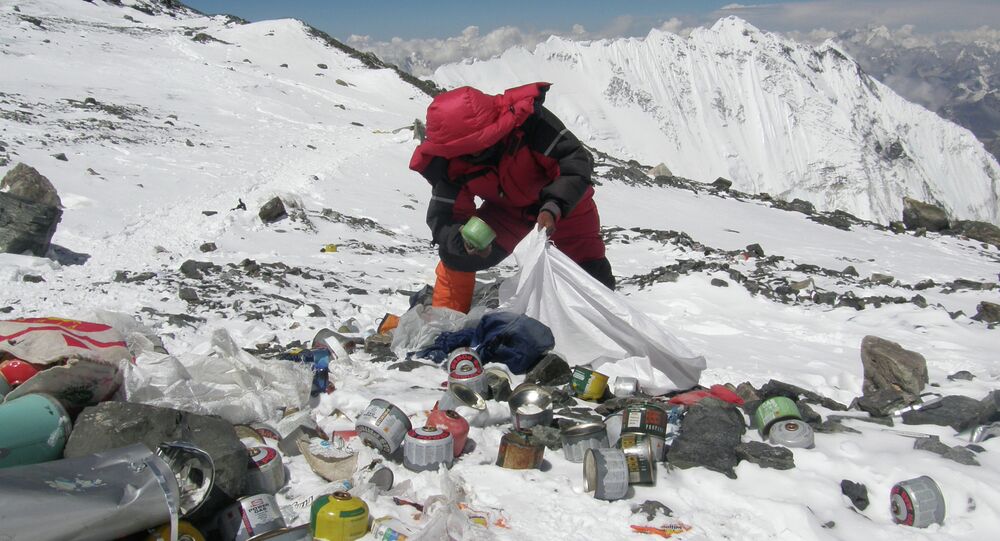 Thousands of mountaineers try to conquer Mount Everest every year; in the process, they leave behind a trail of litter, causing a grave environmental threat to the Himalayan range and countries in the region.

New Delhi (Sputnik) — As part of a massive campaign to clean the world's highest mountain peak, Nepal aims to airlift more than 100 metric tons of rubbish from Mount Everest in the Himalayan Range. More than 5,000 kg of waste has already been brought to the capital Kathmandu from Mount Everest for recycling. The non-biodegradable waste collected from various locations include beer bottles and cans, empty food cans, as well as discarded mountaineering and trekking equipment.

The waste was brought to Lukla Airport, situated in the Khumbu region of Solukhumbu District in the Sagarmatha Zone of north-eastern Nepal, from where it was flown to Kathmandu for recycling. The process will continue throughout the year under the Everest Clean-Up Campaign.

The Everest clean-up campaign was launched by Valerie Julliand, Resident Coordinator of the United Nations and UNDP Resident Representative in Nepal.

Nepal's Sagarmatha Pollution Control Committee, Himalayan Club, Blue Waste to Value (waste management organization), and the local government are the other partners in the campaign. Private airliners Yeti Airlines and Tara Air have pitched in by offering to airlift the garbage collected from the Everest region to Kathmandu.

"The Yeti Airlines will airlift 100 tonnes of non-biodegradable waste in the year 2018 from Everest region to be recycled in Kathmandu," the airlines said in a press statement

@FlyYeti proudly inaugurates its mission to airlift 100 tons of waste from #khumbu region in partnership with SPCC, Himalaya Club & Blue Waste to Value. Thanks to @UNDPNepal @valeriejulliand @renaudmeyer for joining us along. #UNYeti4SDGs #yetiairlines pic.twitter.com/urdj7zZ7nO

​Sir Edmund Hillary of New Zealand and Tenzing Norgay of Nepal were the first men to scale the world's highest peak in 1953.

Mount #Everest is located in the Mahalangur #mountain range in Nepal and Tibet.🌄🌋 Its peak is 8,848 m. 🌃🌉 pic.twitter.com/jdFeva5SPS