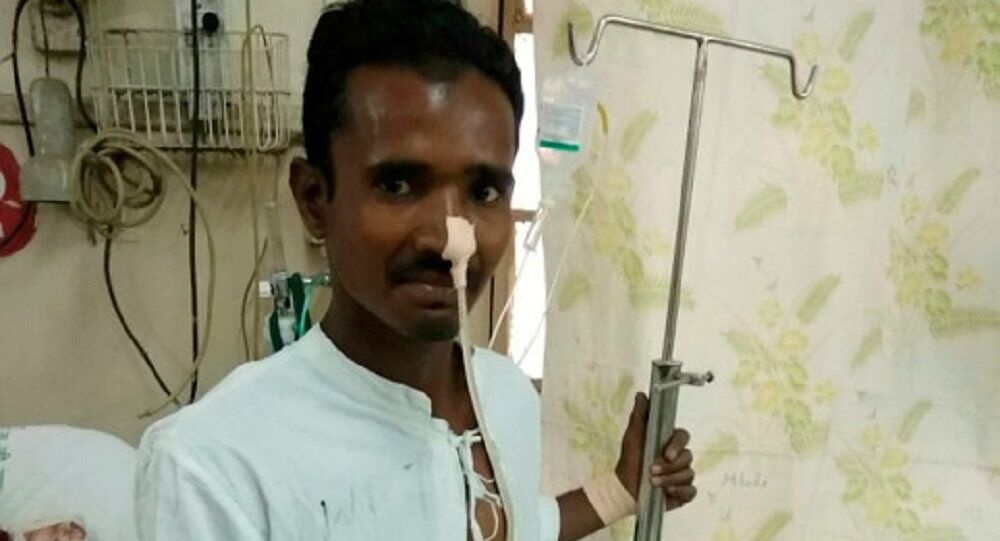 Impaled By a Rod Through Groin to Neck, Indian Laborer Miraculously Survives

A 33-year-old construction worker, Salim Sheikh slipped from his harness and fell onto a pile of steel rods. After preliminary treatment at a local hospital, he traveled 200 km by road to Mumbai with the four foot long rod still lodged in his body.

New Delhi (Sputnik) — An Indian construction worker has miraculously survived after being impaled by a steel rod that pierced his body through his groin perforating the liver, abdomen, intestines, and chest before protruding from his collarbone. Sheikh was working on the first floor of an under-construction building in the central town of Nashik when he fell onto a pile of steel rods.

When fellow construction workers saw him squirm with pain, they approached him only to find him lying half-conscious in a pool of blood. He was taken to a nearby government hospital where he was resuscitated after preliminary treatment.

Sheikh then had to travel almost 200 kilometers by road to Mumbai with the 4-foot long pole still lodged into his torso.

"The rod that was protruding at the back of his collarbone didn't allow him to lie evenly inside the ambulance. We bought an inflatable pillow and placed it between the rod and his head. But every time, we would hit a pothole or a speed-breaker, he would scream in pain. He was in and out of consciousness and pleading for us to save him," Naseem, Sheikh's mother told the Times of India.

While Sheikh's family anxiously waited outside the operation theater, unsure whether he would make it, a team of doctors at Mumbai's JJ hospital carried out a five-hour long complex surgery to remove the rod from Sheikh's body.

Shiekh is now reportedly out of danger and recovering in the general ward of JJ hospital.

At least 20 Killed, 24 Injured in Road Accident in Philippines - Reports

Aeroflot Cancels 22 Flights Due to Runway Accident in Moscow Airport