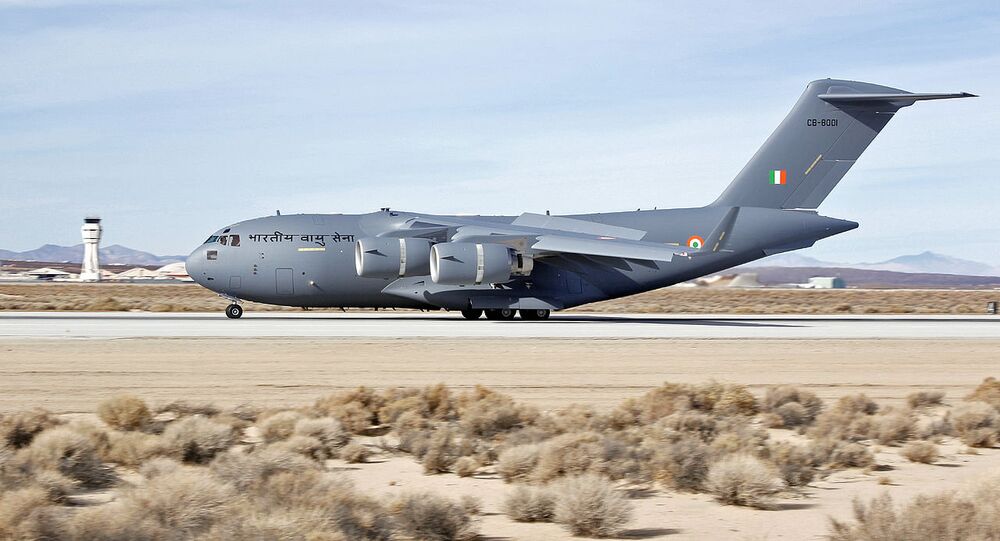 In 2009, India started reconstruction of disused advanced landing grounds in Arunachal Pradesh – just 29 kilometers from China. Six of them have become operational, and work is in progress to make the seventh operational. Construction of the eighth is pending, due to connectivity issues.

New Delhi (Sputnik) — The Indian Air Force (IAF) on Tuesday landed its heaviest transport aircraft at the Tuting advanced landing ground (ALG) which is a few miles away from the line of actual control (LAC) — the de facto border with China. Tuting is part of a disputed swathe of land claimed as South Tibet by China and Arunachal Pradesh by India. It was this area in which Indian troops claimed to have intercepted a Chinese civilian team carrying out road building activity in December last year. The Indian side had claimed it sent back the Chinese team after confiscating their construction equipment.

"The IAF C17 Globemaster carried out a historic landing at Tuting ALG, Arunachal Pradesh. The challenging airfield is in midst of high hills in a narrow valley. The mission was executed flawlessly due to the superlative performance and excellent flying skills of the pilots," the IAF tweeted.

After the completion of the trial landing, the C17 carried out an operational mission, airlifting a load into the plain airfield. In November 2016, the IAF had successfully landed the C-17 Globemaster at its strategic Mechuka ALG in the West Siang district of Arunachal Pradesh, which is just 29 kilometers away from the de-facto border with China.

The process of reconstructing seven ALGs along the border with China was started by India in 2009. Of the seven ALGs in Arunachal Pradesh which are being upgraded, works and services at six ALGs have been completed, while only 3% of the work is s left at Tawang. The IAF has already landed the Sukhoi and C-17 Globemaster transport aircraft at most of the ALGs.

India had also planned to develop an eighth ALG at Vijayanagar but the work could not be taken up due to the non-availability of road connectivity. Now that road projects are being laid in its neighborhood, work is expected to start at Vijayanagar as well, according to a parliamentary standing committee report tabled on Tuesday.

The IAF has also identified 24 disused airfields for other purposes such as the deployment of long-range radars, weapon storage, and the dispersal of strategic assets during operations, emergency recovery strips, the deployment of AD weapons, and helicopter operations.