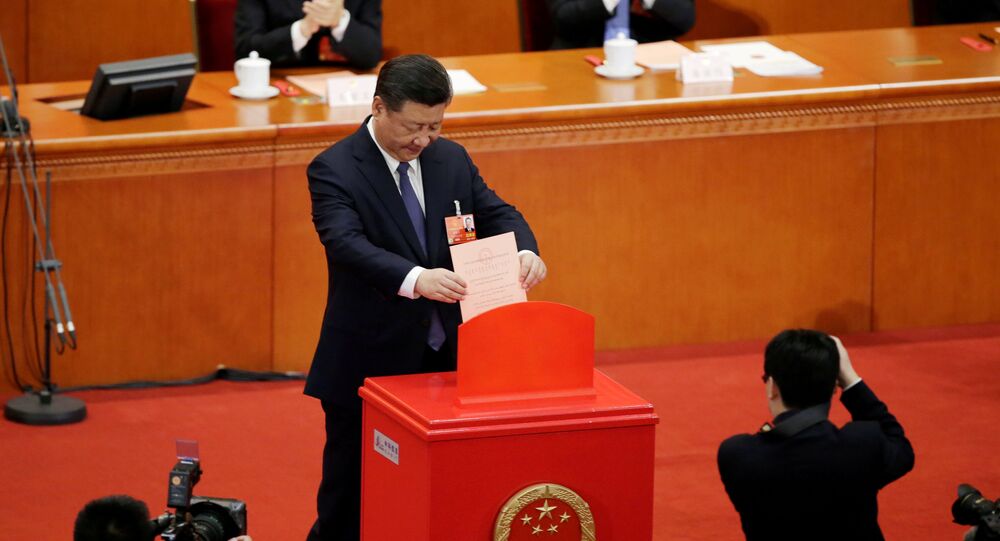 According to a new amendment to China's constitution, the country's president will no longer be limited to two consecutive five-year terms. Lawmakers also approved the inclusion of incumbent President Xi Jinping's name in the constitution.

BEIJING (Sputnik) — Chinese lawmakers have passed an amendment to the nation's constitution lifting the limit for consecutive presidential terms during the third plenary meeting of the first session of the Chinese National People's Congress (NPC) on Sunday.

In late February, the Central Committee of the Chinese Communist Party proposed the removal of the constitutional provision implying that Chinese president and vice-president should serve no more than two consecutive terms.

The lawmakers have also passed the amendment adding to the preamble Xi Jinping's name, and it reads now "under the guidance Xi Jinping's Thought on Socialism with Chinese Characteristics for a New Era".

His thoughts were recognized as the newest achievement of China's Marxist theory and will be on par with the ideas of Mao Zedong, Deng Xiaoping's theories, as well as theories about the protection of China's culture, national interests and leading productive forces.

The new institution will carry out own investigations and then hand the cases over to the prosecutors. It will also have the authority take the suspects into custody for up to six months without charges.

The NPC session kicked off on March 5 and will finish on March 20.

China’s Xi Poised for Perennial Power? Not So Fast